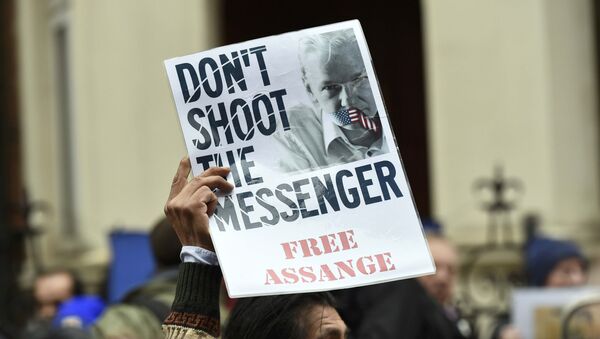 Purported “fake news” detecting browser extension NewsGuard has a biased system for rating news sources, unfairly giving WikiLeaks a purely negative review and a red X while verifying Fox News with a green check mark and little to no criticism.

Sputnik previously reported on Microsoft's launching of the app back in August 2018, noting at the time that it was purported to be "Enhancing digital media literacy and transparency" by Microsoft Vice President for Customer Security & Trust Tom Burt, who called it a "powerful tool to reduce the impact of disinformation campaigns."

Since then, it has been revealed that the page's advisory board is a veritable who's-who of the US security state establishment, including a former CIA director, a former Homeland Security secretary, a former White House communications director, a former undersecretary of state for public diplomacy and a selection of mainstream media owners and editors, Sputnik reported.

On Monday, WikiLeaks tweeted that the app's rating system, which is now part of the iOS Edge beta's default settings, gives the website a red X rating, whereas it gives Fox News a verified green check mark, with a similarly stark contrast in its description of the two sites, their content and their character.

​Under NewsGuard's ‘nutrition label' for WikiLeaks, it warns prospective readers to "Proceed with Caution: this website generally fails to maintain basic standards of accuracy and accountability."

The page describes WikiLeaks as "A publisher of confidential corporate and government documents, usually acquired from leakers and hackers. WikiLeaks has published government secrets as well as sensitive personal information, and strategically published hacked emails, traced to the Kremlin, that hurt Democrats ahead of the 2016 presidential election."

Among the app's objections are Xs next to: gathers and presents information responsibly; regularly corrects or clarifies errors; handles the difference between news and opinion responsibly; website discloses ownership and financing; and the site provides names of content creators, along with either contact or biographical information.

What's ironic is that half of these the app's content description actually explains in a justifiable way, noting, for example, that "WikiLeaks does not appear to run corrections, although it almost exclusively publishes primary source documents, which have never been shown to be fake."

One would think this would vindicate a news site from allegations of bias, the need to distinguish between news and opinion, or to clarify errors. And of course, gathering and presenting information "responsibly" is always in the eye of the beholder, as are many other of these metrics.

"The website of Fox News Channel, the most-watched cable and satellite news channel in the United States, created by Rupert Murdoch as a conservative counterpoint to the three major broadcast networks and CNN."

While we love the dig at CNN, this description reads like an ad for the network itself. A world away from the WikiLeaks descriptor, which immediately launches into a litany of supposed failings.

The only red Xs Fox gets are on: regularly corrects of clarifies errors; website discloses ownership and financing; and reveals who's in charge, including any possible conflicts of interest.

This, NewsGuard insists, constitutes "basic standards of accuracy and accountability," earning Fox News a green checkmark. But is it really a world of difference from WikiLeaks?

Aside from the obvious reasons that mainstream news politicos and US state functionaries might wish to elevate Fox News while denigrating WikiLeaks, the disparity is further fueled by NewsGuard co-founder Gordon Crovitz's personal hatred of WikiLeaks and its founder, Julian Assange, who he apparently believes deserves to be prosecuted in the US under the Espionage Act in the interests of protecting "the free flow of information."

Why prosecuting Julian Assange under the Espionage Act would protect the free flow of information, http://on.wsj.com/fF5FNt

​Is it possible for an organization headed by figures such as these to be objective in their measure of the veritability of news sites from across the political spectrum? As one network might say: we report, you decide.