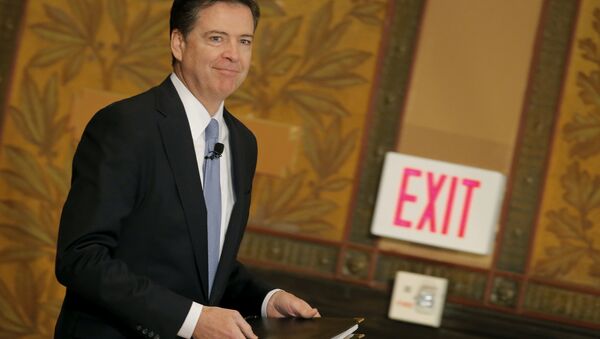 News broke Friday that after US President Donald Trump fired then-FBI Director James Comey in May 2017, the agency opened a counterintelligence probe into the head of state. The unprecedented move has worrisome implications for the power of the deep state.

The revelation comes from former agency officials, who told the New York Times that Trump firing the FBI director was seen as a possible national security concern, given its ongoing investigation into alleged Russian collusion with Trump's election campaign the previous year, as well as alleged interference in that election, neither of which has a shred of evidence to support it.

Radio Sputnik's Loud and Clear spoke with Coleen Rowley, a former FBI special agent who in 2002 was named Time Magazine person of the year along with two other whistleblowers; and Daniel Lazare, a journalist and author of three books — "The Frozen Republic," "The Velvet Coup" and "America's Undeclared War" — about the revelations.

​Rowley said that historically, US presidents have feared the power of the FBI director, noting that "every president was afraid of firing J. Edgar Hoover," who headed the bureau for 47 years, from its inception in 1924 until his death in 1972. "He had acquired so much power in that time frame that the presidents just basically let him die in office, so there is a precedent here for this kind of fear by elected officials of very powerful intelligence directors."

Lazare called the FBI investigating Trump "constitutionally uncharted waters," noting it raises the question of "who's in charge here, the FBI or the president? If the president says something or does something the FBI doesn't like, can the FBI launch a criminal investigation on what seems to me to be, really, very shaky grounds?"

Rowley noted Hoover's monitoring and harassing of many people close to the presidency, including Henry Wallace, who was vice president from 1941 to 1945 and later ran on the Progressive Party ticket in 1948, as well as First Lady Eleanor Roosevelt.

"What happens is that, in a time of war, these directors, who are then getting more and more powerful, with their so-called ‘war powers,' with the so-called ‘enemy,' it's very hard for that then not to migrate back, because they get used to doing these things on foreign enemies. And then, of course, they start talking and they say, ‘Oh, so-and-so could be in league with that foreign power,' so it just migrates back home, and all of a sudden they are spying on domestic officials. It's just a very easy jump," Rowley said.

"The FBI guards its turf very carefully, and it's quite unclear as to whether it's on top or the elected officials are on top," Lazare told hosts John Kiriakou and Brian Becker. "In the case of Trump, the FBI is a self-appointed guardian of national security, and faced with the president who they — and I think for no good reason — suspected of being a foreign agent, they took it upon themselves to launch a criminal investigation with no political oversight."

"To me, that raises the gravest constitutional concerns," Lazare said. "Who's in power? Where does real power lie? Does it lie with elected officials or with the permanent bureaucracy, otherwise known as the deep state?"