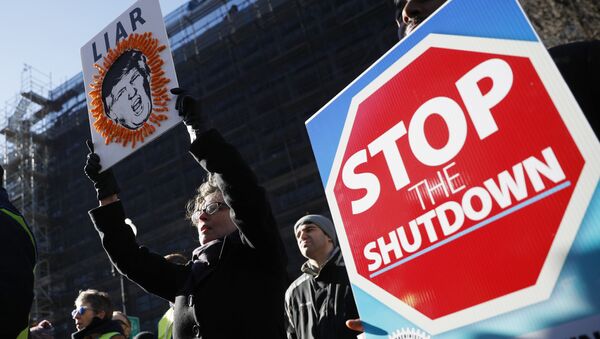 WASHINGTON (Sputnik) - President Donald Trump said at the White House on Monday that he rejected a proposal from Senator Lindsey Graham to reopen the government for a few weeks while negotiations on border wall funding continue.

"That was a suggestion that Lindsey made, but I did reject it. I am not interested," Trump told reporters on the South Lawn ahead of his departure to New Orleans.

Trump Furious Over Dems 'Having Fun' Amid Government Shutdown
Graham, who is one of Trump's most loyal allies in the Congress, told Fox News on Sunday that he urged the president to reopen the government before "he pulls the plug," a reference to the president's option of declaring a national emergency.

In his remarks to reporters on Monday, Trump said he wants to get the shutdown resolved because the crisis on the border remains crucial. He insisted, however, that Democrats must admit that the United States needs border security and agree to compromise.

On Monday, the government shutdown entered day 24 without an agreement on a spending bill. Trump has requested more than $5 billion for the construction of the wall on the border with Mexico. Democrats believe the project would be a waste of time and should not be executed at the expense of American taxpayers.