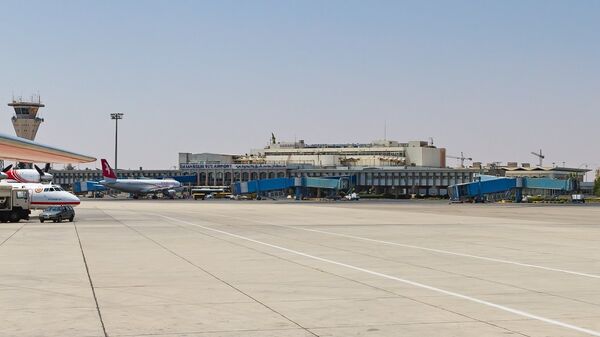 Israel claims that the air raid, which took place on the night of 11-12 January, was aimed at alleged Iranian military targets situated in Syria. Damascus has condemned Tel Aviv's strike and urged the UN to respond in light of repeated Israeli attacks.

Syrian Minister of Transport Ali Hamud said on 14 January that the latest airstrike by Israeli jets in the Arab Republic damaged not only service buildings at Damascus International Airport, but also several planes, rendering them useless.

"The shrapnel damaged wings of several jets. As you know, fuel tanks are situated in the wings. Due to this, the use of several planes has been stopped", he said.

Ali Hamud also noted that the remaining fleet of air planes is ageing and currently in dire need of spare parts.

The minister said that apart from planes, several buildings at the airport were also damaged in the airstrike. He added that an aircraft repair hangar was among them. It had already been damaged in an earlier Israeli strike and hadn't been repaired by the time of the last one.

Israeli jets conducted an air raid on the night of 11-12 January, hitting targets in the suburbs of Damascus. Syrian air defences downed most of the missiles. Damascus condemned the strike and urged the UN to take steps to prevent further Israeli air raids.

Tel Aviv claims that the jets were targeting Iranian military objects, allegedly located in the Arab Republic. Israel has made similar claims in the past to justify its numerous airstrikes on Syrian territory. Tehran has repeatedly denied the Israeli claims, stating that it only has military advisers present in the Arab state at the request of Damascus.