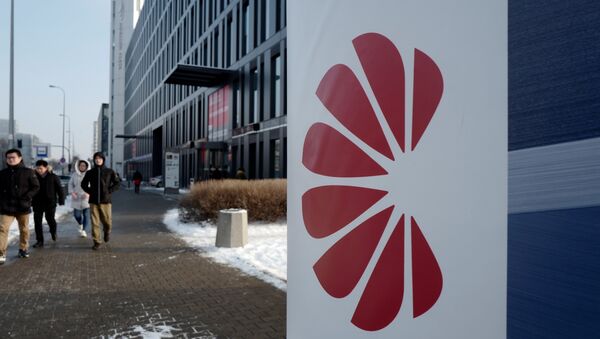 As expert from the Russian Institute for Strategic Studies Mikhail Belyaev has told Sputnik, the Czech Republic and Poland’s support for the United States on the issue of Huawei could result in the reduction of Chinese investments and restrictions on their companies’ activities in China.

On Monday, 14 January China’s Global Times called for tough measures to be taken in response to the arrest of Huawei employee Wang Weijing on suspicion of espionage.

The Czech government has obliged 160 leading companies that use Huawei and ZTE technologies to test their information systems for possible national security risks. Additionally, Czech Prime Minister Andrej Babiš admitted on Sunday via Prague Prima TV that the government had been completely surprised by the security department’s suggestion to have the country’s key companies refrain from using the technology of these Chinese companies.

World
China 'Deeply Concerned' Over Huawei Employee's Arrest in Poland – Foreign Min.
For his part, President Milos Zeman also admitted that the security department had no evidence to do that, claiming they have therefore threatened the strong position and economic interests of the Czech Republic in China.
Zhou Rong, a researcher at Renmin University in China, pointed out that relations between China and the Czech Republic have always been very friendly.

“The Czech Republic is a member of the ‘16+1 Cooperation’. Last year, President Xi Jinping visited the Czech Republic. It’s important to know that Chinese leaders’ visits to a Central and Eastern European country alone are very rare”.

Science & Tech
Two Huawei Employees Punished for Posting Company Tweet From iPhone (PHOTO)
Wang Weijing, the sales director of Huawei Poland, along with a Polish man named Piotr D., previously held senior positions at the Internal Security Bureau, mastering government communications network data that secretly conveyed information to primary figures in the country, were arrested in Poland on charges of cooperating with the Chinese intelligence services. Polish intelligence services have searched the homes of both suspects, Huawei’s office, and at Orange Polska, where Piotr D. worked. According to Polish media, neither of the two suspects has admitted their guilt.

If China and Huawei don’t respond to the actions by the Polish authorities, the world may think that “it can intimidate Chinese companies”, China’s Global Times said on Monday. “China shouldn’t be gentle on this issue. China shouldn’t threaten Warsaw – it’s not worth doing so, but Poland should pay for its actions”. The newspaper also added that “Beijing should insist on negotiating with Poland and take appropriate measures to let the world know that the Poles are accomplices of the United States”.

However, The Wall Street Journal reported that Polish Interior Minister Joachim Brudzinski echoed US exhortations for allies to exclude Huawei Technologies Co., and other Chinese hardware makers from their telecommunications systems. The newspaper also noted that “Poland is joining the US in pressing its NATO allies to coordinate efforts to address security challenges from China”.
According to Li Kai, an expert from Shanxi University of Finance and Economics, pressure on Huawei has become a tool to curb China’s scientific and technological progress.

“Judging by the current state of China-US relations, the Sino-US trade war has already become a war of science and technology. The United States is omnipotently blocking Huawei, continuously strengthening the image of Huawei equipment leaking US state secrets, and using its allies to jointly ban and put pressure on Huawei. In fact, the Americans have now abandoned the former ‘props’ of freedom and democracy; they’re unscrupulously blocking China’s scientific and technological progress, trying to recover their position in the arms market. They are striving to contain Huawei in every way, so Huawei’s situation is rather complicated”.

India Believes West is Not Altruistic About China's Huawei - Official
Mikhail Belyaev believes that the Czech Republic and Poland are both peripheral members of the European Community and newcomers to the market economy, so they certainly need to establish their image of loyalty to a stronger partner and the leader of the western hemisphere.

“They are acting according to Washington’s will, apparently under pressure from the United States they feel that this is exactly what should be done to cater to them. China has the tools to put these two respected European countries, Poland and the Czech Republic, in the framework that it needs. Given the status of Czech and Polish companies in the Chinese economy, economic counter sanctions may be adopted; China may also impose some restrictions. If the Chinese government believes that this benefits the country, its policies, economy, and its future, they will do so easily and without strain”.

The expert believes that “China can adjust its trade and investment activities in Eastern and Central Europe to bypass Poland and the Czech Republic. They are not China’s largest partners. China can reduce the supply of high-tech equipment to them. Without it, whether it’s Poland or the Czech Republic, the road to the future digital economy will be blocked, as China is at the forefront in this area”.