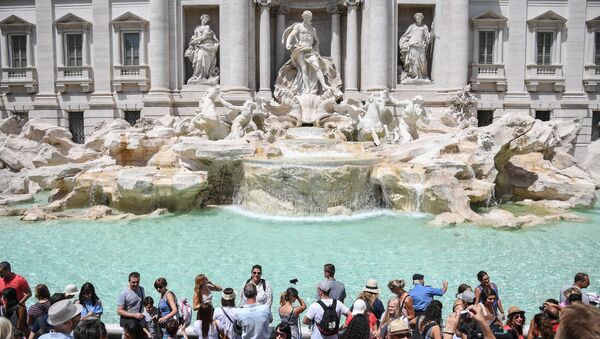 © AP Photo / Alessandro Di Meo
Subscribe
International
India
Africa
The nearly $1.7 million in coins tossed annually in the iconic Trevi fountain in the Trevi district of Rome, Italy, will continue to be donated to a local Catholic charity, as has been customary for the last 18 years, despite a misunderstanding ‒ or what some are calling a battle ‒ over the funds between the Catholic Church and Rome’s City Council.

The alleged change was reported by Rev. Benoni Ambarus, the director of the Caritas charity, which usually receives the fountain's windfall. He told Italian newspaper Avvenire Saturday that the coins collected in the famous landmark, which was designed by Italian architect Nicola Salvi and completed by Giuseppe Pannini, would go toward the city's infrastructure instead.

"The gift that comes from the Trevi Fountain in Rome is a rain of coins that creates a sea of good," Ambarus said.

"I refused to think about closing services for the poor. I still hope that the trust in Caritas will be reconfirmed, that we will be able to find a way that intertwines reasonableness, solidarity and the joy of coin tossing, to keep this network of help alive," he added.

According to Avvenire, the funding from the Trevi Fountain constitutes about 15 percent of the charity's yearly budget, and would thereby slash Caritas' budget by around that amount if the church no longer has access to the Trevi funds, which usually go toward soup kitchens, homeless shelters and social assistance programs.

However, on Monday, Roman Mayor Virginia Raggi told Italian newspaper L'Osservatore Romano that the incident was a misunderstanding and that Caritas would continue to receive the money collected in the fountain.

"No one ever thought about depriving Caritas of these funds," she told the newspaper on Monday. "The diocesan agency plays an important role for many needy and for the city of Rome, which wants to continue to be the capital of welcome for the weakest," she added, also noting that instead of Caritas volunteers, Rome city department employees will now be responsible for sorting and counting the coins.

"Tourists and citizens will finally know how much is collected and who is destined [to receive the money]. And Caritas will also be able to plan its charitable activities more easily," Raggi told the media outlet.

Tossing coins in the Trevi fountain, which was commissioned by Pope Clement X11 in 1932, was made popular by the 1954 comedy "Three Coins in the Fountain," which tells the story of three hopeful Americans visiting Italy who toss coins into the Trevi Fountain, each making a wish.