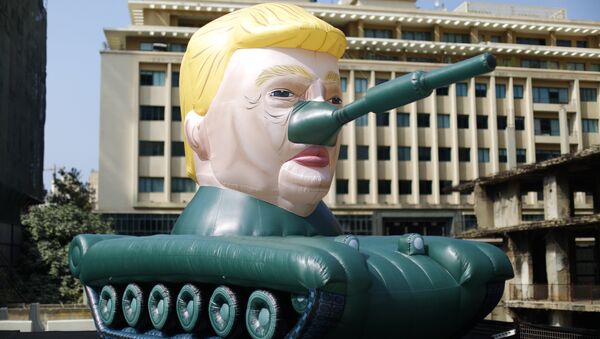 © AP Photo / Hassan Ammar
Subscribe
International
India
Africa
Following revelations of Israel’s strikes against Iranian targets in Syria, it became known that Washington had also mulled over plans to attack Iran after three mortar shells landed in Baghdad’s diplomatic quarter near the US Embassy in September 2018. The US blamed Iran for the attack, despite Tehran’s categorical denial.

The Pentagon has agreed to lay out options for hitting Iran at the request by US National Security Adviser John Bolton, The Wall Street Journal reported, citing a former senior presidential administration employee. The outlet points out that it remains unclear whether the US president was aware of this, but said that the White House had mulled a military attack on Iran after three mortar shells struck the diplomat quarter in the Iraqi capital Baghdad, near the US Embassy in September 2018.

While no one was wounded in the incident, it angered the US.

"It definitely rattled people. People were shocked. It was mind-boggling how cavalier they were about hitting Iran", former US high-ranking official told The WSJ.

The attack on the green zone in Baghdad escalated growing tensions between the US and Iran over Washington’s withdrawal from the nuclear deal and slapping Tehran with new sanctions. The US blamed Iran-aligned militants for the incident, although there were no immediate claims of responsibility for the attack.

“Iran did not act to stop these attacks by its proxies in Iraq, which it has supported with funding, training, and weapons”, the White House’s statement said.

The US warned Iran not to launch attacks on US government facilities in Iraq, saying: “America will respond swiftly and decisively in defence of American lives”. Secretary of State Mike Pompeo blamed Iran for "indirect fire", while Tehran dismissed the allegations as US "propaganda and false accusations" and condemned any attacks on diplomatic sites.

The revelations about the US preparing options to hit Iran came hot on the heels of recent statements by Prime Minister Benjamin Netanyahu that the Israeli Air Force had struck Iranian targets in Syria. He pointed out that "the accumulation of recent attacks proves that we are determined more than ever to take action against Iran in Syria, and we will strike harder in Syria if needed". This fell in line with his earlier vows to continue Israeli operations in Syria to counter Iran's military presence in the country, despite Tehran’s insistence that its presence is limited to military advisors assisting the country's forces in their fight against terrorism.