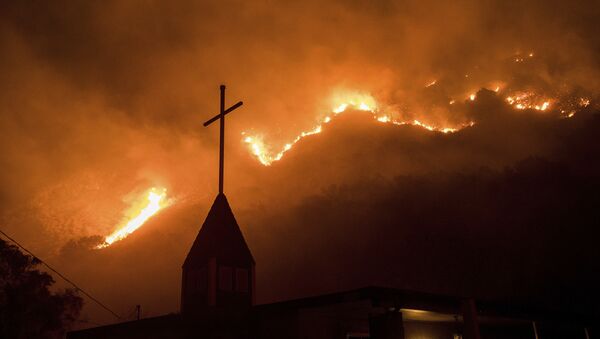 © AP Photo / Noah Berger
Subscribe
International
India
Africa
The administration of US President Donald Trump relies heavily on the support of followers of evangelical Christianity as a “motivating force” behind their policies, and that could prove dangerous to global stability, according to a recent report by The Guardian.

During a Thursday speech in Cairo, Egypt, at the American University in Cairo, Secretary of State Mike Pompeo, himself an avowed evangelical Christian, referenced text from the Christian Bible and noted that a copy of one is kept on the seventh floor of the US State Department, in his office.

"This trip is especially meaningful to me as an evangelical Christian," Pompeo — a former American businessman with deep ties to the US religious right wing — said.

"I keep a Bible open on my desk to remind me of God and His Word, and The Truth," Pompeo declared, noting that the US "will not retreat [from the Middle East] until the terror fight is over," also stating that the Trump administration has "learned that when America retreats, chaos often follows."

Pompeo's belief in the Christian evangelical version of ‘truth' is noted by many to be at the heart of what makes the Trump administration a danger to global stability.

According to a recent report by the Guardian, the "apocalyptical Christian vision of the future" held by many US evangelical Christians is deeply linked with Israel and the world's Jewish population. This belief, known as "premillennial dispensationalism," or "Christian Zionism," directly impacts US foreign policy in Palestine and Iran, according to the current political evangelism personified in the policies of the Trump administration.

"He [Pompeo] knows best how his faith interacts with his political beliefs and the duties he undertakes as Secretary of State," commented Stan van den Berg, the senior pastor of Pompeo's personal church in Wichita, Kansas. "Suffice to say, he is a faithful man," the priest added, cited by The Guardian.

Many see this reliance for Trump's political survival on the approval of US evangelical Christians as an achilles' heel, threatening any intelligent Washington DC conversation about foreign policy through a dependence on a 2000-year-old system of beliefs.

"Many [evangelical Christians] relish the second coming, because for them it means eternal life in heaven," noted Andrew Chesnut, a professor of religious studies at Virginia Commonwealth University.

A ‘second coming,' as described in the Christian Bible, refers to a belief that the Christian messiah, Jesus Christ, will return from heaven to judge humanity.

"There is a palpable danger that people in high position who subscribe to these beliefs will be readier to take us into a conflict that brings on Armageddon [the Christian description of the end of the world]," Chestnut observed, cited by The Guardian.

Many white US evangelicals, Chestnut observes, believe in a form of Christian Zionism, pointing to a return to the so-called Holy Land by those who believe in the Jewish faith.

An estimated 80 percent of white US evangelicals voted for Trump in 2016 and his popularity among this particular demographic has remained constant at around 70 percent, the Guardian reported.

An estimated quarter of the population of the US is thought to profess to some form of Christian evangelism, while some half a billion devotees of sect exist worldwide, according to Pew Research.

Some evangelicals view Trump as a latter-day King Cyrus, the founder of the first Persian empire, under whom a Babylonian captivity was ended.

This comparison was made in The Trump Prophecy, a pseudo-religious film posted online in October 2018 concerning the character of a retired firefighter who claims to have heard God telling him, "I've chosen this man, Donald Trump, for such a time."

Lance Wallnau, featured in the film, describes Trump as "God's Chaos Candidate" and a "modern Cyrus," the Guardian observed.

Trump's choice of prominent Christian evangelical hardliner Mike Pence as his Vice President is indicative of the latter's loyalty to evangelical preachers, alongside of Trump's recent order to move the US embassy in Israel from the city of Tel Aviv to Jerusalem, revealing the heavy evangelical influence on foreign policy in his administration.