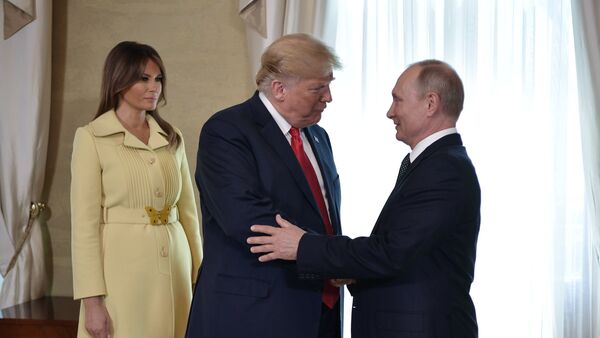 The much-anticipated meeting between US President Donald Trump and his Russian counterpart Vladimir Putin in July has been a subject of much speculation and concern in the United States, with many Democrats insisting on the need to make Trump’s interpreter disclose the details of the one-on-one conversation.

In a phone interview with Fox News host Jeanine Pirro, US President Donald Trump said that he would be willing to reveal the details of his private dialogue with Vladimir Putin in Helsinki.

“I would. I don’t care. I’m not keeping anything under wraps. I couldn’t care less. I had a conversation like every president does. You sit with the president of various countries. I do it with all countries”.

POTUS described his talks with Putin – at which only the two presidents and their interpreters were present – as a “great conversation”, adding that they had discussed “Israel and securing Israel and lots of other things”.

World
Canada’s Trudeau Reveals What He Thinks About Putin and Trump
Trump’s comments came hours after The Washington Post reported that the US president “has gone to extraordinary lengths to conceal details” of his rendezvous with Putin. The media outlet claimed that Trump had seized the notes of his own interpreter.

Alarmed by the secrecy of the closed-door summit, Democrats and Trump critics have been pressuring the current administration to release interpreter notes to find out what, if any, pledges Trump made to Putin.

Critics and the media have sought to subpoena interpreter Marina Gross, who was the only other American in the room for Trump-Putin tete-a-tete talks, to appear before Congress:

Congress needs to call the interpreter to testify. Given that the FBI suspects that Trump is working for Russia, we need to get to the bottom of this. https://t.co/xSNEpOeYiD

In fact, compelling Gross to testify before Congress might be unethical: secrecy is a rock-solid tenet for interpreters, who are bound by the strictest code of ethics, which stipulates that any information conveyed in a translation or during interpreting must be held in confidence.

Social media users have stressed that it’s been common practice not to disclose the details of conversations held behind closed doors:

Did Obama and Hillary ever disclose what they discussed with Putin behind closed doors? American media has gone bonkers. #TDS

Other netizens emphasised that Gross’s notes were not a transcript of the conversation:

1 Her notes are not a transcript. They are an in-the-moment shorthand to assist her in not leaving out of her interpretation any information that was said, and are likely illegible
2 A professional interpreter would destroy those notes immediately afterward, and be right to do so

Does the interpreter even have her notes? The notes are just memory jogs for the moment and not of any use afterwards.

Good, the interpreter should not be talking about confidential discussions between two world leaders. Many many investigations over two years still prove Trump did nothing wrong, no collusion.

As President Trump has himself stressed, he had a casual conversation with Putin – like with any other president, – but it’s only the interaction with the Russian president that has plunged the mainstream media into hysteria mode, while critics have dismissed the talks as “disgraceful” and “treasonous”.

Earlier in the day, Trump once again took to Twitter to express hope about having “good relations with Russia again” someday, at the same time claiming that he has been “tougher” on Russia than “any other president”.

I have been FAR tougher on Russia than Obama, Bush or Clinton. Maybe tougher than any other President. At the same time, & as I have often said, getting along with Russia is a good thing, not a bad thing. I fully expect that someday we will have good relations with Russia again!

In the meantime, the US House of Representatives Foreign Affairs Committee announced its decision to hold hearings on Trump-Putin meetings, Chairman Eliot Engel said.

“Every time Trump meets with Putin, the country is told nothing. America deserves the truth and the Foreign Affairs Committee will seek to get to the bottom of it. We will be holding hearings on the mysteries swirling around Trump’s bizarre relationship with Putin and his cronies, and how those dark dealings affect our national security”, he said.

The much-anticipated summit between Trump and Putin was held in Helsinki on 16 July 2018 with both presidents dubbing the talks a “success”.

During a joint press conference, the two heads of state addressed a wide array of issues, including Russia’s alleged meddling in the US election, the crises in Syria and North Korea and the 2015 landmark nuclear deal with Iran.

World
Pelosi Brands Trump-Putin Relationship 'Dangerous'
Trump-Putin relations have been making mainstream media headlines since the 2016 election in the United States, when Trump was accused of conspiring with the Kremlin to win the vote.

The current administration has on a multitude of occasions denied any collusion with Russia during the election campaign, with POTUS branding the allegations as a “witch hunt”. Moscow has also dismissed the accusations as “baseless”, emphasizing that no evidence has been provided to corroborate the claims.

President Putin, for his part, stressed in Helsinki that Russia “has never interfered and is not going to meddle in US internal affairs, including in the election process”.