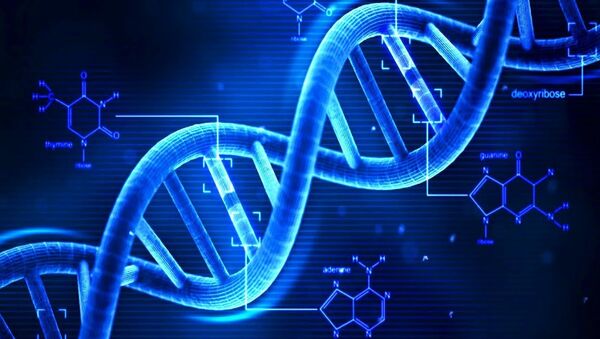 © Photo : youtubify.ru
Subscribe
Nobel Prize-winning American scientist James Watson, who helped discover the stranded double-helix of DNA, has had several honorary titles stripped from him by the laboratory in which he worked after making non-scientific, racist assertions, including those detailed in a new documentary film.

Watson, who, along with Francis Crick and Maurice Wilkins in the 1950s, discovered the double-helix structure of DNA, received the 1962 Nobel Prize in Physiology or Medicine for their ground-breaking research.

In a recent PBS film, "American Masters: Decoding Watson," Watson said that genes cause an intelligence difference between white and black people when using IQ tests.

The 90-year-old geneticist lost his job at the Cold Spring Harbor Laboratory, in New York, in 2007 (where Watson had been a director between 1968-1993) for expressing those views publicly that year.

At the time, Watson told a magazine that he was "inherently gloomy about the prospect of Africa" as "all our social policies are based on the fact that their intelligence is the same as ours — where all the testing says not really," cited by News.sky.com.

In the 2007 article Watson went on to avow that, while he wanted everyone to be equal in terms of intelligence, "people who have to deal with black employees find this is not true."

An apology and retraction was issued by Watson that year following worldwide public outcry, although reports noted the scientists' statement rang false.

The 2019 PBS film reveals that Watson's views on intelligence and race have not changed.

"Dr. Watson has not been involved in the leadership or management of Cold Spring Harbor Laboratory for more than a decade and he has no further roles or responsibilities at CSHL. In response to his most recent statements, which effectively reverse the written apology and retraction Dr. Watson made in 2007, the Laboratory has taken additional steps, including revoking his honorary titles of Chancellor Emeritus, Oliver R. Grace Professor Emeritus, and Honorary Trustee," the statement added.

According to Watson's son, Rufus, his father has been living in a nursing home following an October automobile crash. The son rejected the idea that his father is "discriminatory" and a "bigot."

"My dad's statements might make him out to be a bigot and discriminatory [but] they just represent his rather narrow interpretation of genetic destiny," Rufus said in a statement obtained by multiple sources.

"My dad had made the lab his life, and yet now the lab considers him a liability," the younger Watson suggested.

000000
Popular comments
FugMcKeown, whilst whatever you note might be true, I personally have to question whether the principle of IQ-tests is so universally applicable. It's a bit like saying : "a cat doesn't know how to talk, it's brain is smaller - hence it can't be as clever as we are." A cat is perfectly suitable to its environment and it might have capabilities (such as photographic memory) of which we can only dream of and which might NOT be caught during an IQ-test. The ironic result - in MY opinion - might be that the socalled "superior" race will nuke itself into obliteration whereas the the "subsaharan" people would be quite happy to herd their goats and survive - if it wasn't for those "clever" "nukers". Our "white" intelligence might just be an aberration of reality and the IQ-test a tool to prove that it isn't .....

Robin Whood
14 January 2019, 03:34 GMT4
000000
Political correctness has run amuck! According to The Institute for Diversity and Ethics in Sport, the NBA was 74.3 percent black during the 2015-16 season, but I was once called a racist for suggesting black people are better at basketball than white people.