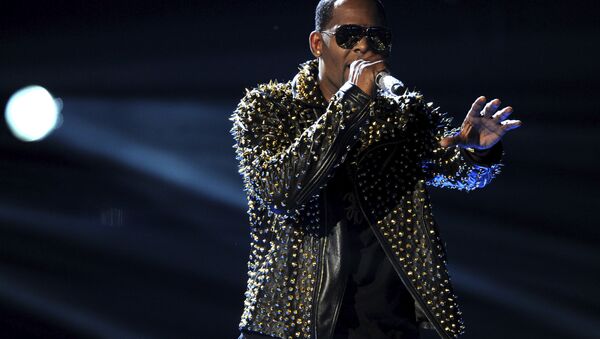 © AP Photo / Frank Micelotta
Subscribe
Earlier this month, a documentary titled Surviving R Kelly was aired in the United States, featuring claims of the rap star sexually abusing women and underage girls, prompting police in the State of Georgia to launch an investigation.

With allegations of sexual abuse against him being presented to the public in a recently aired documentary, and police in Georgia subsequently launching an investigation into these claims, rap star R Kelly has broken his silence, telling everyone exactly what he thinks about the claims while celebrating his birthday at the V75 Chicago nightclub.

"Y'all motherf***ers don't know but it's my motherf***ing birthday and I don't give a f*ck what's going on tonight," the rapper yelled to the audience after singing the opening lines of his hit Bump N’ Grind.

The occurrence triggered mixed reactions on social media, with many netizens blasting Kelly over the sexual misconduct allegations hurled against him.

Today is @rkelly's 52nd birthday.  FIFTY TWO! He is OLDER than the parents fighting to get their children back from him. He is THIRTY years older than most of the girls he's brainwashing and abusing in his house.  #SurvivingRKelly #MuteRKelly
Illustration @louisabertman pic.twitter.com/UkmE2gPnAM

Is R. Kelly’s birthday, just 3 days after the #SurvivingRKelly documentary aired (well played 😉). I’m just wishing for his birthday, he’d get slapped with some charges, that would stick & get him convicted.

Plenty of girls shared their 14th birthday with R.Kelly.

Today, on R. Kelly's 52nd birthday, he finds out the State of Georgia is launching a criminal investigation on him.

Others, however, ignored these claims and simply wished the musician a happy birthday.

Happy 52 Birthday to the King of R&B Mr R Kelly Enjoy your born day, keep your head up stay focus let god do his work, believe it or not God gat u one loves 😇🙏😍🎈🎂👑😘 pic.twitter.com/JyEk2aUP9s

Screaming Happy birthday to Greatest artist ever. @rkelly I have been a fan of your since 1997 and will always be.💜💜💜 pic.twitter.com/29wl0FW6fL

@rkelly HAPPY BIRTHDAY TO THE MAN
SHAKING HATERS OFF ONE AFTER THE OTHER ALWAYS NUMBER ONE IN MY BOOK pic.twitter.com/LuqDcB0bZs

Happy Birthday to my dawg, they trying to bring you down like Cosby, keep your head up homie 💪🏽 @rkelly pic.twitter.com/OqGAngRY5P

The party was also briefly interrupted by police officers who were responding to an anonymous tip of an alleged warrant for R Kelly’s arrest, according to TMZ.

Lady Gaga's Apology for 'Dark Life Period' Work With R Kelly Gets Debated Online
After confirming that there actually was no warrant, the officers left the club, allowing the party to continue.

While it remains unclear whether someone was pranking the singer or genuinely believed there was an arrest warrant for him, police explained that they routinely respond to such calls “just to make sure”, the media outlet added.

This week, American pop star Lady Gaga issued a public apology for her 2013 single "Do What U Want" featuring R. Kelly, insisting that the allegations against him are "absolutely horrifying and indefensible".

Earlier, a documentary called Surviving R Kelly was aired in the United States, featuring claims of the rap star sexually abusing women and underage girls, prompting police in the State of Georgia to launch an investigation.