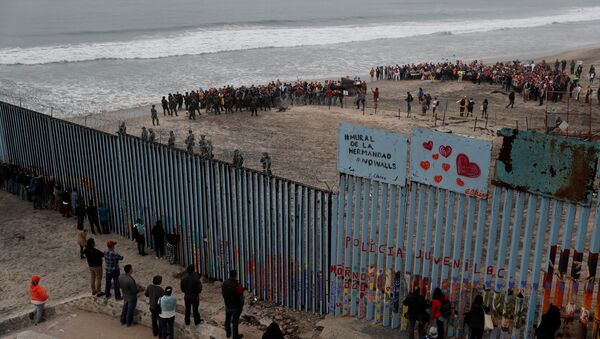 © REUTERS / Carlos Garcia Rawlins
Subscribe
Money raised by a GoFundMe campaign started by Brian Kolfage, a triple-amputee Air Force veteran, that was intended to raise $1 billion for a wall along the US-Mexico border will be refunded to donors upon request, after the online cash aggregate noted that contributions fell staggeringly short of the intended goal.

According to GoFUndMe spokesperson Bobby Whithorne, the border wall online campaign's founder promised donors that all donations would go toward building the wall along the southern border proposed by US President Donald Trump — if the campaign met its $1 billion target, cited by the Insider.

The campaign barely managed to break 2 percent of its goal, however, bringing in less than $20 million, and the amount will be refunded to donors upon request.

"As a veteran who has given so much, three limbs, I feel deeply invested to this nation to ensure future generations have everything we have today," Kolfage, an Iraq War veteran, said in a December 2018 statement announcing the online donation regime.

In a Friday update on the GoFundMe campaign page, Kolfage wrote that his team spent "countless hours over the holidays reviewing all issues pertaining to the construction of a southern border wall."

"Unanimously," he declared of his advisors at the time, "we have come to the conclusion that […] we are better equipped than our own government to use the donated funds to build an actual wall on the southern border."

Following low interest in his now-failed plan, however, the new GoFundMe update adds that donations will be "promptly refunded" to donors.

Currently, nine of 15 federal departments, as well as dozens of other agencies and federal programs, have closed or decreased services because the president has refused to sign a $5.6 billion budget bill that does not include spending for his wall — a key campaign promise.

In addition, some 800,000 federal employees have been on furlough or are being forced to continue working without pay, costing the US economy an estimated several billion dollars, Sputnik previously reported.

000000
Popular comments
20 million dollars collected from the dimes, nickles and pennies of WORKING CLASS people and Sputnik calls this a staggering failure? You guys would probably characterize the sinking of the Titanic as a qualified success since it got at least half way to its destination.