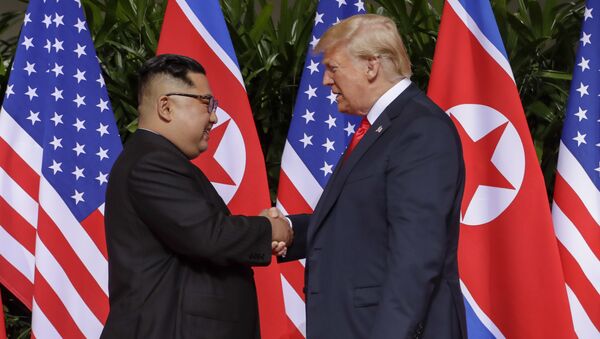 "If there is a second summit, that will basically mean that the Trump has won out [against competing agendas in the administration], and that there will be a significant shift in US policy toward North Korea," Lee told Radio Sputnik's By Any Means Necessary on Friday.

"I think Trump's instinct is to take bold action here, and I think there are several reason for this," she added, suggesting that the president's desire to outdo his predecessor Barack Obama and to compete with China for "hegemonic" control of Asia were driving factors in a potential shift.

​Earlier this week, Kim traveled to China at the invitation of Chinese President Xi Jinping for a brief summit to discuss international matters, including that of stalled denuclearization talks between the US and North Korea. The visit marked the fourth summit between the two countries. Both world leaders met in 2018 on three different occasions.

According to China's Xinhua news agency, during the visit, which lasted from January 7 to January 10, Xi informed Kim that Beijing fully supports a second summit between Pyongyang and Washington, stressing his hopes that both countries are able to "meet each other halfway."

Kim's trip to Beijing came just a week after his annual New Year's address to the nation, in which he reiterated his commitment to denuclearization, but at the same time emphasized that things could still change if the US continues with its sanctions.

"Kim Jong Un is basically saying he wants to bring together these parties [China, North Korea and the US] to discuss replacing the unstable armistice regime with a permanent peace system," Lee told hosts Eugene Puryear and Sean Blackmon, referring to the 1953 Korean Armistice Agreement that brought an end to hostilities in the Korean War.

"The delegation on this recent China trip includes key people in charge of US-North Korea relations and the nuclear talks. That indicates that the trip was really to get China's commitment and cooperation to… having multi-party talks and replace the armistice with a peace treaty within this year."

And while both North and South Korea have made great strides in thawing relations by de-escalating tensions along the demilitarized zone and working together on various projects, it's ultimately up to Washington regarding how things will proceed.

"A roadmap for reunification should really be a task that is solely for the Korean people, without foreign intervention, but economic cooperation, which is a key aspect for this process… [is] the biggest obstacle, that has been the US policy of sanctions," Lee told Blackmon.

Most recently, in December 2018, the US Treasury Department sanctioned three senior North Korean government officials under the 2015 Executive Order 13687 on the grounds of human rights abuses. North Korea followed the US' move by threatening to permanently cease its nuclear disarmament.