She Said 'Yes!' South African Miss Universe Gets Engaged to US Star Athlete 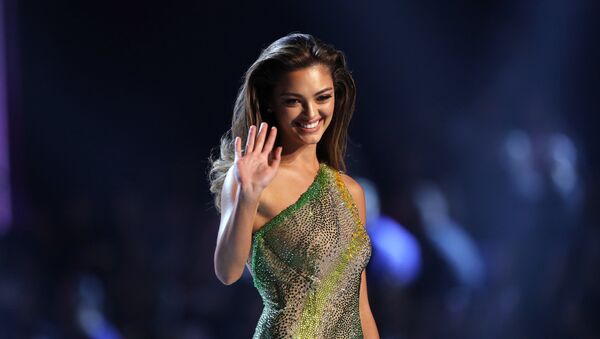 © REUTERS / Athit Perawongmetha
Subscribe
The duo shared news of their engagement on social media, expressing their happiness and intent to spend the rest of their lives together, with scores of netizens wishing them well.

This development was revealed by the happy couple via Instagram, where the athlete posted a photo of himself proposing to his sweetheart on one knee, writing in the caption that Demi-Leigh made him "the happiest man in the world", adding that he can’t wait to spend the rest of his life with her.

"Any dreams I’ve ever had, you’ve exceeded them all! I love you and I can’t wait to spend forever with you!" Demi-Leigh responded on her own account.

Both posts accrued tens of thousands of likes in less than 24 hours after being published, with scores of social media users wishing the couple well.

News of their engagement did not escape the notice of netizens using other social media platforms as well.

So many have made fun of him for saving himself for marriage. We think it's hot 🔥 A great example of masculine virtue 👏🏼

It's time to pop the corks and celebrate!

In a romantic setting at the Tebow family farm on 9 Jan, Tebow proposed to Nel-Peters in Jacksonville, Florida.

​In December, TMZ Sports noted that Tebow and Nel-Peters were spotted in New York after "officially meeting each other’s parents", and wondered whether this development might soon be followed by engagement.

Well, it seems they were right.