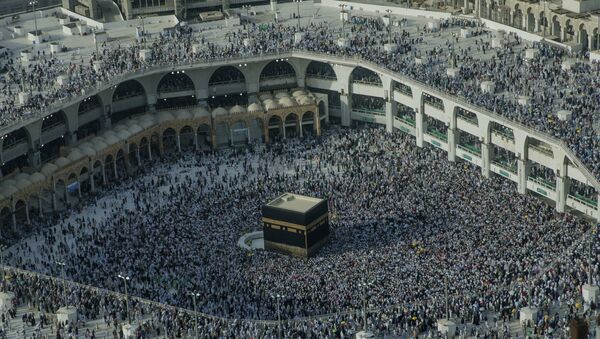 An operation has been launched to eradicate the insects; whether the calamity was a divine message or the result of migration remains a mystery, but the massive swarms of locusts might still look unsettling to some.

The Grand Mosque in Mecca, the most sacred site in all of Islam, has faced an insect invasion this week.

According to multiple videos shared by worshippers from the largest mosque in the world, what looks like hordes of locusts have descended on the site, prompting Mecca's municipal authorities to deploy clean-up teams.

The insects were seen all over in the focal point of the annual Muslim pilgrimage; municipal workers have swept the dead insects into piles and sprayed the walls and floors of the mosque as well as its sewage system and water drains.

"We have harnessed all efforts available to speed up the eradication of the insects in the interest of the safety and comfort of guests to God's house," an official said, as cited by Al-Araby Al-Jadeed media outlet.

No commentary has been available yet on the reasons for the plague.