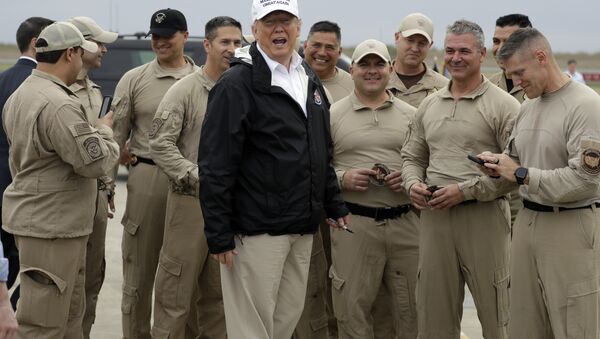 © AP Photo / Evan Vucci
Subscribe
Trump has reiterated his threat to declare a national emergency, which could give him the upper hand in his fight for border wall funding with Democratic lawmakers, who gained majority in the House of Representatives following the November midterm congressional election.

President Donald Trump traveled to Texas on Thursday to meet with forces tasked with keeping undocumented immigrants out of the US.

Trump used his trip to promote his plan for building a long-promised wall on the Mexico border. He delivered a brief address from McAllen, a border town in the Lone Star State, standing alongside members of the US border patrol, Immigration and Customs Enforcement officers, and law enforcement.

"We all wanna see a wall, or a barrier, because that's gonna make their job a lot easier and actually they'll be even more effective than they already are," POTUS said.

He insisted that a barrier, whether steel or concrete, would help border guards curb drug smuggling and human trafficking, as well as counter criminals such as the violent gang MS-13.

From the Southern Border…. pic.twitter.com/Vgsf5nEZUH

Donald Trump, a staunch opponent of illegal migration, told reporters before departing to Texas that he had the "absolute right" to declare a national emergency. This comes as the partial shutdown of US government agencies stretches into a fourth week, as he has failed to secure the requested funding for the border wall in the House of Representatives.

His cherished border wall has become an extremely divisive issue which has caught a lot of flak from the left, particularly from the Democratic Party, whose lawmakers rejected Trump's demand for $5.7 billion in border wall funding.

However, as some social media users have pointed out, there has been a number of high-profile Democrats who have also called for enforcing the US border. Some people have stressed that the Dems have said pretty much the same as Donald Trump, but have not supported him to keep the nation divided.

They include New York Senator Chuck Schumer and California Senator Dianne Feinstein, as well as Trump's predecessor Barack Obama, who has called the current situation on the border a "humanitarian crisis".

1. Trump: There is a Humanitarian Crisis at the border

2. Obama: There is a Humanitarian Crisis at the border

RETWEET & tag a Democrat!
They don’t want us to see this pic.twitter.com/l8ozvnAayn

Thank you for your continued protection at the Southern Border! Even Chuck thinks it is a great idea. #QAnon #WWG1WGA pic.twitter.com/XpVaRZyyrS

At present, there is a 600-mile long barrier on the 1,900-mile US border with Mexico consisting of 16-foot high fence. Trump has said he plans to erect a steel wall over 30 feet tall along 200 miles of the US-Mexico border.