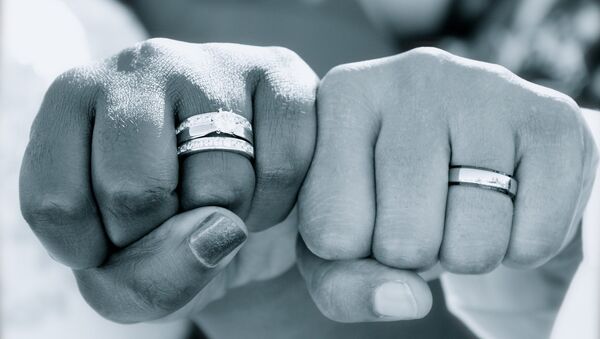 CC0 / /
Subscribe
International
India
Africa
The US Department of State has approved thousands of requests made by older men wanting to bring their underage spouses or fiancées to the Land of the Free, government data collected by the Associated Press reveals.

In reviewing data from 2007 to 2017, reporters found that the US Citizenship and Immigration Services (USCIS), which is the agency that first examines petitions before passing them to the State Department for approval, received some 3.5 million petitions during that period of time.

Of the 3.5 million petitions, the State Department gave their seal of approval to 5,556 cases that detailed applicants, 149 of whom were aged 40 and older, wanting to bring their minor spouses or fiancées stateside. Another 2,926 approvals were given to minors seeking to bring older spouses to the US.

The agency also approved 204 requests made by minors reportedly wanting to bring their minor spouses. There were also 5,000 cases that saw adults petitioning on behalf of minors who wanted to bring their spouses to the US.

Data reviewed by the news agency also revealed that in the majority of the cases, girls were the younger partner in the relationship. In one case from 2011, authorities approved a petition submitted by a 14-year-old girl who was requesting that her 48-year-old spouse in Jamaica be allowed to relocate to the States.

According to the report, USCIS considers whether the marriage is legal in the home country of the spouse and in the US state where the petitioner resides. Once the petition clears the USCIS, it's up to the State Department to give the final say.

In a statement to the publication, officials with the USCIS did not expand on the State Department's process; however, they did indicate that roughly 2.6 percent of claims are rejected. Countries making the most petitions to admit minor spouses to the US included Mexico, Pakistan, Jordan, the Dominican Republic and Yemen.

At the age of 13, Naila Amin, a dual citizen from Pakistan, was forced into marrying her first cousin, who at the time was 26 years of age. The pair were initially betrothed to one another at the ages of eight and 21.

"My passport ruined my life," Amin told the outlet. "I was a passport to him. They all wanted him here, and that was the way to do it."

"I want to know: Why weren't any red flags raised? Whoever was processing this application, they don't look at it? They don't think?" she questioned.

In Amin's case, the petition ultimately fell through after she ran away from her New York City home, instead opting for an arduous life that saw her in and out of foster care and group homes before being able to get back on track.

But the matter of child brides isn't only linked to petitions submitted to the USCIS. A 2017 report by the Tahirih Justice Center, an advocacy organization focused on protecting the rights of immigrant women and girls, found that more than 200,000 children under 18 were married in the US between 2010 and 2015. Some states allow individuals as young as 16 to marry, with some requiring a parental consent.

In January 2018, KNOX News profiled the case of a young woman who was 13 years old when her parents held a religious ceremony to bless her marriage to man in his mid-20s. For years the woman, who preferred to remain anonymous, lived with her husband. The pair are now separated, and fighting for custody of their daughter.

Data reviewed by AP was first obtained in 2017 by the Senate Homeland Security Committee at the initiative of US Sen. Ron Johnson (R-WI), who serves as the chairman of the committee, and then-US Sen. Claire McCaskill (D-MO). The two lawmakers have since criticized the USCIS for delaying the delivery of the report for more than a year.