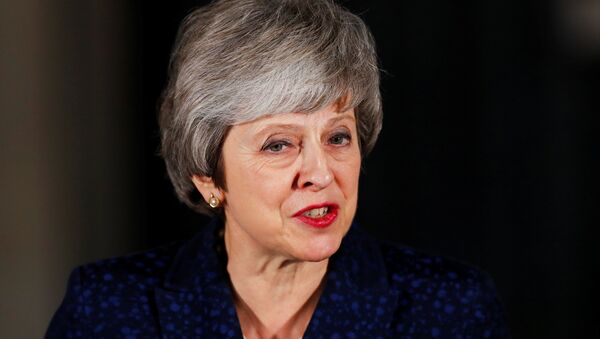 After being humiliated in Parliament for a second time, Britain’s Prime Minister Theresa May, will now be forced to produce a ‘plan b’ to her Brexit within three days if she loses next week’s meaningful vote in the commons. Colin Fox, National Co-Spokesperson of the Scottish Socialist Party has discussed the parliament debates with Sputnik.

Sputnik: Following yesterday’s scenes in the House of Commons, it’s safe to say a ‘no deal’ is more or less off the table. With this in mind, what are the most likely steps that Britain’s government will take with Brexit?

Colin Fox: Well that’s a really good question, because if I knew what going to happen I think I could be a very rich man today at the bookmakers. I think the atmosphere at Westminster, looking at it from afar, it’s febrile. There’s a panic that’s set in. It’s clear that Theresa May’s meaningful vote, which we expected a month ago, looks set to be defeated again; but the problem that Westminster has is that all of alternatives look like they will get defeated too. Theresa May, having failed to win over the hard right of her own party, the Brexitiers, she has now today tried to woo the Labour Party MPs with promises of concessions on workers’ rights and environmental standards.

Sputnik: On the back of this, Opposition Leader, Jeremy Corbyn, has called for a general election to break Brexit deadlock. Is this something the government will likely consider?

Sputnik: Yesterday Theresa May was humiliated in parliament for a second time. Looking ahead, is there any chance of the Prime Minister’s Brexit deal will pass through parliament?

Colin Fox: I’m bound to say I almost feel sorry for Theresa May but it’s only almost, I don’t quite. I think she’s got more humiliations to come between now and 29th March, it’s a humiliation a day for Theresa May, never mind a pound stretcher, this is a humiliation stretcher for her. The irony of all this is that in the country as a whole, the 70 million of us who are watching this show as it’s an Edinburgh festival show, as intoxicating as it is, it’s all pretty meaningless because frankly little will change after Britain leaves the EU. The same people who are in charge today will be in charge afterwards. The population looks at this, scratches its head, and goes ‘when are people going to start talking and acting on things that are important to us?’ because there’s very little sign of it so far.