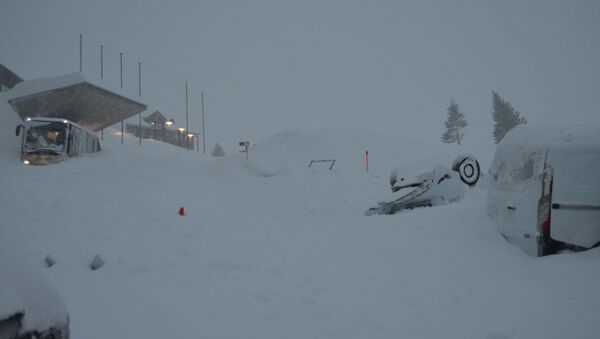 © REUTERS / Appenzell Ausserrhoden Cantonal Police
Subscribe
International
India
Africa
The five-meter-high avalanche descended near Peak Sentis on the Schwagalp Pass as a result of heavy snowfall; the search for the missing is underway, according to Swiss German daily Tagblatt.

An avalanche hit the restaurant of the Hotel Santis in Schwagalp in the canton of Appenzell Ausserrhoden in eastern Switzerland on Thursday, according to media reports.

UPDATE: Police have confirmed 3 people received minor injuries when an avalanche hit a hotel in eastern Switzerland on Thursday. The search for people missing in the snow has now been suspended because of… https://t.co/7KNOP0GeWO pic.twitter.com/5BwzAOQ6Ti

Around the same time, 75 people were evacuated from the Hotel Santis.

On Friday morning, the search for possible missing persons, suspended during the night, continued with 76 rescuers and two search dogs leading the rescue effort.