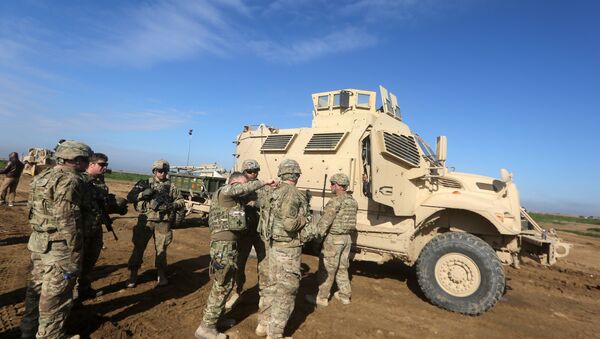 © AFP 2021 / AHMAD AL-RUBAYE
Subscribe
According to Ryabkov, at the moment in Washington, the position of those who consider it necessary to maintain the US military presence in Syria is rather strong.

"I don't know the way this presence may be formatted and whether it will be open or secret. However, I can't imagine the US physically, fully and undisputedly withdrawing from Syria militarily all of a sudden in the current situation: Washington's unrestrained chase for global domination and the strive to be present everywhere and solve issues only on its terms," Deputy Foreign Minister Sergei Ryabkov stated.

This comes amid US National Security Adviser John Bolton arrival to Washington from his trip to Israel and Turkey, where he held talks on the American withdrawal from Syria. However, some US media outlets reported that during his trip, Bolton may have discussed possible US plans to maintain its presence in the country to counter Iran.

Trump's Syria Pull-Out: US and Turkey on Thin Ice Over Kurds… Again
Earlier, NBC news reported, citing a senior US official, that some US troops could stay behind at At Tanf, a key base in southern Syria, after American forces leave the country. According to Politico magazine, Bolton promised this to Israeli and Turkish officials during talks this week.

Commenting on the credibility of the United States, a military analyst and retired Lebanese Army General Amin Hteit told Sputnik that the confusion surrounding the withdrawal of American troops undermines it. Moreover, from the very beginning, the mechanism of the pullout operation of US military forces wasn't clear, now everything is becoming even more complicated, and trust into the statements of American politicians is diminishing.

"Americans want to retain control over the At Tanf base for several reasons. Firstly, it is needed to support the terrorists and their families, who live in camps nearby. Secondly, the base is close to the border with Jordan and Iraq and this allows [the US] to influence the security situation in the entire region. The Americans understand that as soon as they leave, the Syrian army will immediately put an end to the militants," the former Lebanese Army General explained.

Pompeo: US Troops to Withdraw From Syria, Continue Anti-Daesh Fight
Amin Hteit also stressed that he believes that the American forces can stay in Syria for a long time to cover up for terrorists and achieve other strategic goals. They will continue to work in the east of the Euphrates and in Al-Hasakah province in northern Syria.

His remarks came after, on 19 December, US President Donald Trump declared victory over Daesh* in Syria and announced his decision to withdraw US forces from the country on Twitter.

"So our boys, our young women, our men, they're all coming back and they're coming back now. We won, and that's the way we want it", Trump said in a video post.

Following a backlash over his initial announcement, Trump reconsidered his original 30-day timeline for the withdrawal of some 2,000 US troops from Syria, reducing it to four months.