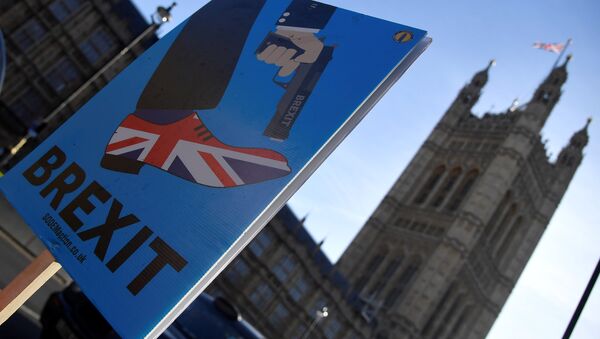 © REUTERS / Toby Melville
Subscribe
MOSCOW (Sputnik) - The chair of the UK parliament's Public Accounts Committee, Hillier, said SkyNews that she would approach the National Audit Office with a request to probe the government's secret contracts with international consultancy firms for support for Brexit worth £75 million ($95.7 million).

"It's not a secret that the government needs management consultants to help prepare for Brexit. But not to tell us what those consultants are doing, when they're being paid between £5m and £10m, is just crazy… I will be talking to the National Audit Office about this. We've talked to them before about other contracts and they have the ability to go into a contract and see, in details, what's involved. They will have to make a judgment about what is possible to reveal," Meg Hillier, the chair of the UK parliament's Public Accounts Committee told the SkyNews broadcaster on Thursday commenting on the revelations.

She condemned the fact that the government failed to report back to the people about the state's actions just three months before the United Kingdom's planned departure from the European Union, stressing that the cabinet was spending taxpayers' money.

Transatlantic Chaos Reaches UK as MPs Threaten Government Shutdown Over Brexit
Earlier in the day, the SkyNews broadcaster reported that the UK government concluded nine major contracts with the world's leading consultancy companies worth 5-10 million pounds each, with none of the deals having been publicly announced by the country's officials. According to the news outlet, the information about the contracts brought into force in mid-2018 was placed on the government's official website only before Christmas.

The Boston Consulting Group, McKinsey and Company, Inc. United Kingdom, Deloitte LLP, Ernst & Young LLP and PA Consulting Services Limited were among the companies asked to provide consultancy services to facilitate the delivery of Brexit. None of the companies contacted by the SkyNews broadcaster commented on the Brexit-related deals so far.

The United Kingdom is set to leave the European Union on March 29 with the parliament yet to vote on the final departure deal.