‘The Time is Now’: Thousands of LA Teachers to Strike For Better Pay 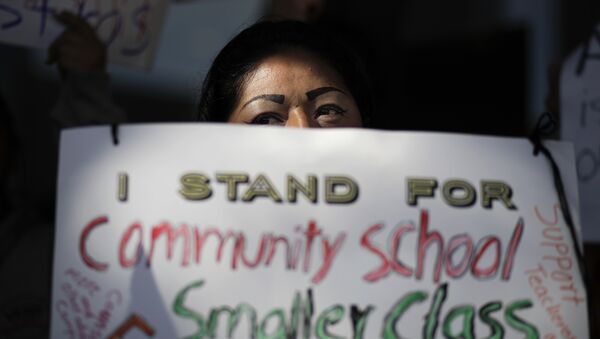 Teachers in the Los Angeles Unified School District (LAUSD) are set to go on strike soon after years of frustration over class sizes, salaries and a shortage of nurses and school counselors.

The strike, which will likely involve around 30,000 teachers, was postponed to January 14, instead of January 10, to provide "clarity and to allow members, parents and our communities to plan," United Teachers Los Angeles (UTLA) said in a statement Wednesday. In addition, the Los Angeles Unified School district challenged the strike's start date of January 10 in court, claiming that it was not provided the 10-day forewarning required by state law.

​The union has been urging the district to hire more counselors, nurses, librarians and other professional staff while reducing class sizes. However, the LAUSD claims that the staffing demands would cost approximately $786 million a year when it is already running a $500 million annual deficit.

"We have been in negotiations with LAUSD since April 2017. We have been working without a contract for almost one year," UTLA said in a statement, adding that "even with $1.86 billion in reserves, LAUSD says it does not have the money to improve our schools." Union members are also urging the district to boost teachers' salaries by 6.5 per cent.

Cecily Myart-Cruz, a teacher in the LAUSD for 23 years and the vice president of UTLA-National Education Association, joined Radio Sputnik's Loud & Clear Wednesday to discuss the strike.

"Respect," Myart-Cruz responded when hosts John Kiriakou and Brian Becker asked her what was driving teachers to strike.

"Educators have been disrespected for a long period of time, and it has been and it's a shame that that continues to happen. Second, class sizes are too big. Yesterday we had parents in out in front of the school district actually talking about these large class sizes. Some kindergarten classes have literally 39 students in a class. [In other grades], teachers are giving up their desks to have students use their desks," Myart-Cruz added.

"Eighty percent of our schools do not have a full time nurse. Let that sink in," she added.

"And so educators have essentially become and have always been counselors, nurses, psychiatric social workers. There are so many things that our students need. We have a duty to represent our members but also our students, our parents and our community at large," Myart-Cruz told Sputnik.

On Monday, the LAUSD proposed a new plan that involves adding 1,000 teachers, counselors, nurses and librarians to schools across Los Angeles. However, the UTLA rejected the proposal, and UTLA President Alex-Caputo Pearl told reporters Monday that he was surprised the district had "so little to offer," NBC Los Angeles reported.

According to Caputo-Pearl, the district's latest proposal doesn't add long-term nurses, counselors and librarians to the school system. In addition, the potential raise for teachers proposed by the district is dependent on reducing teachers' health care benefits.

"We have been at the [bargaining] table for over 20 months, before we even got started," Myart-Cruz told Sputnik, stating that the district kept trying to "stall" the union from discussing a fair agreement.

"The lack of respect is appalling. Our teachers and educators know that, and enough is enough. We've been hopeful to resolve our differences. We are ready to go. We are ready to strike. The time is now," she added.