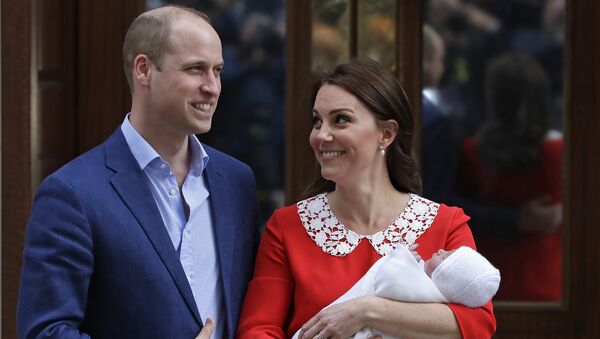 © AP Photo / Kirsty Wigglesworth
Subscribe
Commoners across the UK have turned their attention away from Brexit and a looming general election to monitor changes to English royal Kate Middleton and her ambiguous baby bump.

After the Duchess of Cambridge celebrated her 37th birthday on Wednesday, Townies will take to their local Ladbrokes today to bet odds two-to-one that Mrs. Middleton will spawn her fourth child and announce her pregnancy in 2019.

Thank you everyone for all your lovely messages on The Duchess of Cambridge’s birthday! 📷PA

The latest news carries on a long tradition of British speculation based on no evidence whatsoever, following Russian interference in UK elections, the Skripal affair and the prospects of delaying Brexit indefinitely.

Before Mrs. Markle announced her pregnancy, she sported a buttoned-up coat to hide her tummy, according to the Daily Mirror. But Kate Middleton continues to wear a T-shirt and thong sandals like many Brits in the wintertime, dashing hopes for Royal fans, gamblers, and stock brokers alike.

Kate also suffered from extreme bouts of morning sickness whilst pregnant with her three children, in addition to fits of rage alternated with acute sadness topped with subtle hints of hopelessness, which have not been reported to date.

Prince Louis, the youngest of her offspring, is only eight months old. Due to royal traditions, expecting mums are not to have addition children until the current one has been born first.

Commoners expect that the Cambridges to follow royal tradition, with a line of successors somewhere between Queen Elizabeth II having four children and Queen Victoria birthing nine offspring.

37-year-old Kate still has plenty of time to have another baby before the ravages of menopause seal her fate. In the meantime, royalty fans can still focus all of their attention on soon-to-be-mum Mrs. Markle in 2019 until Katie catches up.

The views and opinions expressed in this article are satire and do not necessarily reflect Sputnik's position.