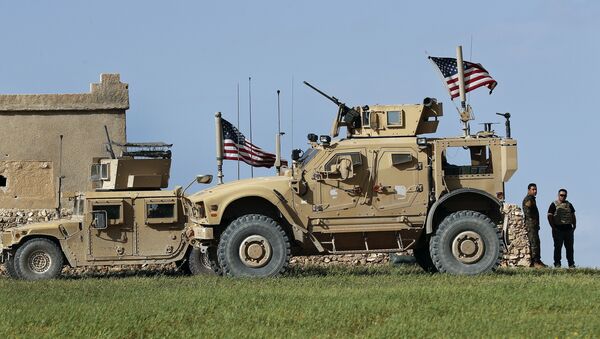 © AP Photo / Hussein Malla
Subscribe
Russia, Turkey and Iran have been the guarantors of the ceasefire regime in Syria, with the presidents of the countries being heavily engaged in negotiations on the peace process in the war-torn Arab state.

Turkish Foreign Minister Mevlut Cavusoglu has voiced a proposal to control the US troops' pullout from Syria jointly with Russia and Iran.

READ MORE: US Syria Withdrawal Must Be Planned in Cooperation With Right Partners — Erdogan

"The United States has been facing several difficulties amid the process of withdrawing troops from Syria. We want to coordinate this process jointly with Russia and Iran, with which we had arranged work in the framework of the Astana process. [It is needed] in order for terrorist organisations not to fill in the void [following the US pullout]," the Turkish top diplomat stated.

Pompeo: US Pullout From Syria Doesn’t Change ‘Counter-Iran Strategy’
The statement comes a day after US National Security Advisor John Bolton slammed Turkish President Recep Tayyip Erdogan's article on the US withdrawal from Syria, published in the New York Times, as 'wrong and offensive'.

Previously, Recep Tayyip Erdogan, commenting on Bolton's statement regarding a possible Turkish operation against Kurdish forces, criticised him by saying that Turkey could never compromise on the issue of the Kurdish YPG militia, as, according to the president, they had never actually fought against Daesh*.

In December, US President Donald Trump declared victory over Daesh and announced that as a result, US forces would soon be coming home.

However, on 7 January Donald Trump emphasised that US forces would leave Syria in a prudent way and would continue to fight the Daesh terrorist group.

On Sunday, Bolton said the planned US withdrawal of nearly 2,000 troops from Syria will be contingent upon finalising an agreement with Turkey that protects Kurdish fighters in the region.

Turkey, along with Russia and Iran, is the guarantor of the ceasefire in Syria. In its turn, Moscow hsa been actively involved in diplomatic efforts on settlement of the conflict, supporting the Syrian government forces' fight against terrorist groups and providing humanitarian aid to civilians.

000000
Popular comments
The US will not leave Syria politely. It has lost the war in Syria; so, it will try to take its revenge on Russia, Iran and Turkey. The US couldn't use the White Helmets as it had planned. The Daesh terror group was beaten. Because of S-300 air defense systems, Israel, France and the UK cannot attack Syria. The US has nothing but the Kurdish groups in Syria to prevent regional peace from being established. Game will be over soon Veysel Yahsi
9 January 2019, 13:34 GMT3
000000
A book written and read many times over... chapters, paragraphs, sentences , wording may change; but alas man's greed is paramount over "common sence" . Said sence?! WE Of the opposing finger believe; can only be found in a species that does NOT! rape and pillage for it's own "awesomeness" . WE of the opposing finger should envy the ant, the honeybee, the whale. But no! WE are soooo rapped up in ourselves that this! OUR species is the fault of OUR so called self proclaimed egoes