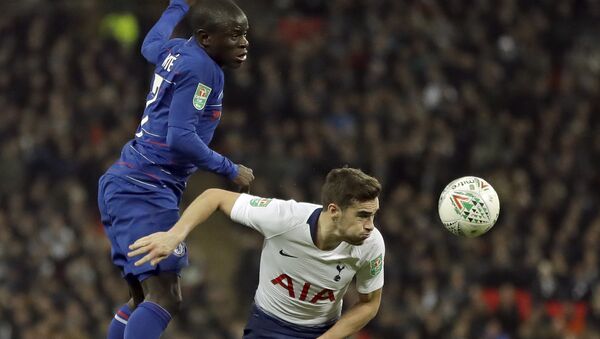 Chelsea FC has redoubled its efforts to raise awareness among supporters about anti-Semitism. Last January, the club kicked off a campaign titled "Say No to Anti-Semitism"; however, in recent months Chelsea fans have been accused of offensive chants at stadiums both in the UK and overseas.

London Police have arrested a 17-year-old teenager for "racially aggravated public order offence" prior to the first leg of the Carabao Cup semi-final between Tottenham Hotspur and Chelsea at Wembley.

The alleged offence is understood to have been anti-Semitic, according to Press Association Sport.

Police have arrested a 17 year old male for a racially aggravated public order offence at tonight's @SpursOfficial v @ChelseaFC The male is currently being dealt with at a North London police station.

Two other males have been taken into custody over similar charges, the Met's Football Unit reported on Tuesday night.

Prior to Tuesday's game, Chelsea FC, which belongs to Russian-Israeli billionaire Roman Abramovich, warned its supporters against anti-Semitic chants.

"In light of recent events and after consultation between both clubs and the Metropolitan Police, we would like to remind supporters of their responsibilities in keeping support positive", the club said in a statement.

"Historically, a small minority [of Chelsea fans] has used the Tottenham fixture as licence to use anti-Semitic chants, noises and gestures, including the Y-word, offering the justification of opposition fans using terms as a form of identity", read the message. Hotspurs fans commonly call themselves the "Yid Army", and also the terms "Yid" and "Yiddos" as nicknames.

This controversial association dates back to the 1890s and 1900s, when the club was the team of choice for people of Jewish descent from London's East End. While many Jewish supporters continue to use the term with pride, some representatives of the Jewish community have deemed the terms pejorative and derogatory.

Last month, a group of Chelsea supporters were heard singing anti-Semitic chants during a Premier League game at Crystal Palace. A similar incident was reported during a Europa League clash with Hungarian top-flight club Vidi — something the Blues condemned, stressing that fans who display anti-Semitism are "shaming the club".