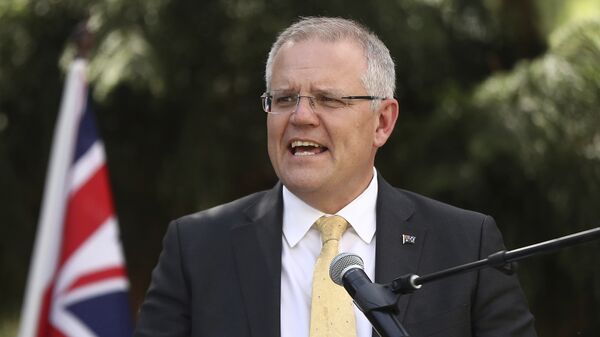 © AP Photo / Mark Metcalfe
Subscribe
International
India
Africa
A sloppy graphic designer in the office of the Australian PM has produced enough meme fodder to feed the country for at least several days, after it emerged that the PM's perfect family photo was marred by a Photoshop gaffe.

Eagle-eyed Australians have noticed that their Prime Minister, Scott Morrison, was wearing two left sneakers in an official photo, according to the main page of his website. Some Twitterians have unearthed the original photo to find out that ScoMo, as he is commonly referred to, had his shoes "replaced" in a graphics editor.

Scott Morrison claimed that he was unaware of this "Pho pas"; he jokingly asked his office to focus more on his lack of hair rather than footwear when doctoring his photos. The poorly doctored photo has been replaced with the original one.

Message to my Department (PM&C): I didn’t ask for the shoeshine, but if you must Photoshop, please focus on the hair (lack thereof), not the feet! 😀
Here they are in all their glory — my footwear of choice whenever I can get out of a suit. pic.twitter.com/hKKUstnArq

Fiona Patten, the leader of Australia's Reason Party, gave Morrison's office a hint on how to use Photoshop in future.

And here is what my staff came up with today… Hey @scottmorrisonmp If you want to photoshop in some new shoes, at least make it worth the effort! pic.twitter.com/bPZT6BYbNe

There is even a tongue-in-cheek conspiracy theory stating that ScoMo has fallen victim to a plot hatched by Photoshop-wielding foes.

There is no way even the most incompetent graphic designer would photoshop 2 left feet and do it that badly. Someone in PMO hates @ScottMorrisonMP

Could the government be hiding the truth? Some Aussies think this could be the case.

"The whole thing was actually just a cover-up! You know how Donald Trump is paranoid about his small hands? Turns out they were trying to hide ScoMo's baby feet!" @pjhelliar #ShoeGate #TheProjectTV pic.twitter.com/pOSuRdei0G

Looks like there is truth to the rumour that Scomo has two left feet. #auspol #shoegate #ScomotheClown pic.twitter.com/yFzGkV7H9L

The wildest of the theories says that this all was a plot by the Prime Minister himself to show that he was in touch with the common people.

Media Advisors “here’s a thought. Let’s do a really bad Photoshop job on the family pic on purpose. It will get noticed, and then we’ll get the boss to jump on Twitter with a humorous rebuttal to show he’s down with the common peeps”.