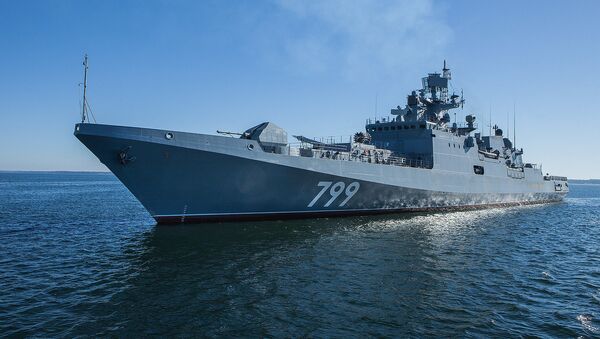 © Photo : JSC "Shipyard "Yantar"
Subscribe
Russia maintains a naval presence off the Syrian coast, consisting of about ten vessels of various classes, including warships and submarines which have been used to rain precision Kalibr cruise missiles down on terrorist targets in the Arab Republic.

An area of international waters off the coast of Syria in the Mediterranean Sea has been closed off for imminent Russian missile firing drills, a NOTAM (Notice to Airmen) circulated Wednesday has revealed.

Russia has repeatedly held drills in the Mediterranean Sea off the Syrian coast in 2018, with the largest such exercises held in September, when 26 ships and 34 aircraft engaged in training in the area amid threats by the US-led coalition to launch airstrikes against Syria under the pretext of the use of chemical weapons in the country's rebel and terrorist-held Idlib province.

Nearly a dozen militant groups are believed to be operating in Idlib, including the so-called National Front for the Liberation of Syria and Jabhat al-Nusra*, which is part of the al-Qaeda franchise.

US Military Plane Conducts Reconnaissance Near Russian Base in Syria’s Hmeimim
In November, Russia deployed the Kalibr missile-armed Admiral Makarov frigate to the Mediterranean. Russia has repeatedly used Kalibrs against Daesh (ISIS)*, al-Nusra and other terrorist groups in Syria. The long-range missiles were first used in October 2015, when gunboats in the Caspian Sea launched Kalibrs at targets over 1,500 km away in Syria. Russia beefed up its Mediterranean Sea deployment this summer, deploying the Admiral Grigorovich, Admiral Essen and Pytlivy frigates to the area, along with the Nikolai Filchenkov landing ship and the Vishny Volochek missile corvette.

The western Mediterranean has been the source of considerable friction between regional and world powers in recent months. Over the weekend, a US spy plane was spotted over western Syria near the Russian base at Hmeimim. Last month, a US P-8A Poseidon was detected flying off of Syria's coast over waters which had been closed for Russian naval drills.

*Islamist fundamentalist terrorist groups outlawed in Russia and many other countries.