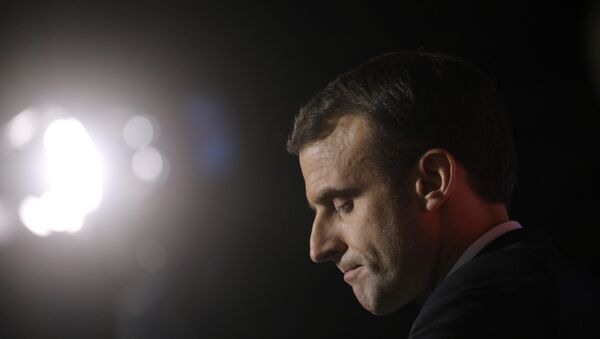 PARIS (Sputnik) - French President Emmanuel Macron’s approval rating currently stands at 28 percent, improving by five points in a month and marking the first improvement in ratings since the start of the nationwide yellow vest protests in November, an Ifop-Fiducial poll showed.

"For the first time since the beginning of the crisis around yellow vests, the approval rating of the president of the republic has improved: in January, it has increased by five points, reaching the November level of 28 percent," the pollster said on Tuesday.

However, 72 percent of respondents still do not approve of Macron’s policies, with 44 categorically opposing them and 28 percent saying that they were unlikely to support them.

At the same time, 6 percent fully backed the French leader, but 22 percent said they were unlikely to throw their support behind him.

Le Pen's Party Advocates Dissolution of Lower Chamber Amid Yellow Vests Protests
The French right-wing National Rally had the highest rating among opposition parties — 35 percent. It was followed by the Unsubmissive France party with 30 percent, The Republicans with 23 percent and the Socialist Party with 10 percent.

The poll, conducted on January 3-4 among 1,014 respondents aged 18 or older, comes amid the so-called yellow vest protests — named after the obligatory attribute of French cars — which started in mid-November. While the French government has scrapped its planned hike in diesel taxes, which is what initially sparked the protests, the yellow vests have evolved into a broader movement against government policies and rising living costs. The rallies have been marked by violent clashes between protesters and the police.