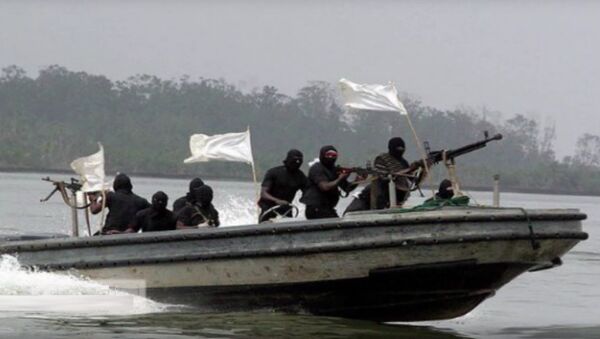 © YouTube
Subscribe
GENEVA (Sputnik) - The owner company of the MSC Mandy ship, which was assaulted last week off Benin's coast, is creating a team that will be tasked to communicate with the pirates who kidnapped six Russian sailors during the assault; the first round of talks may be held later in the day, the company's spokesman said.

"We have engaged security experts and are creating a team for contacting the pirates. The team will include lawyers, negotiators, and employees of a company that deals with security. We hope to establish the first contact today," Rafaele Porzio, the official spokesman for the owner company, told Sputnik on Wednesday.

He went on to say that the owner company had already recruited experts who had provided recommendations on a plan for sailors rescue.

The company has also communicated with the Russian Embassy in Nigeria, asking it to "influence the Nigerian authorities," according to Porzio.

However, Porzio is not aware of the result of these negotiations.

Confirmed: 6 Crew Members Kidnapped by Pirates Off Benin Coast Russian Citizens
The remarks come after pirates assaulted the container ship off Benin’s southern coast early on Wednesday as it was sailing in the Gulf of Guinea. They looted the ship and took the captain, his chief mate, and six Russian sailors captive. There were 23 Russians and a Ukrainian citizen on board. The ship then docked at the port city of Cotonou, Benin's largest city.

The Russian Embassy in Nigeria is cooperating with the Nigerian government in order to track down the location of the captives.

Meanwhile, the Russian Embassy in Benin has communicated with those crew members who have not been taken captive to learn the details of the assault. Benin authorities have opened a criminal case in connection with the incident.

The kidnappers have not contacted the Russian Embassy in Benin yet, neither have the relatives of those abducted.

000000
Popular comments
A revenge kidnapping of the Russian sailors arranged by Ukraine because of the Kerch Strait incident?