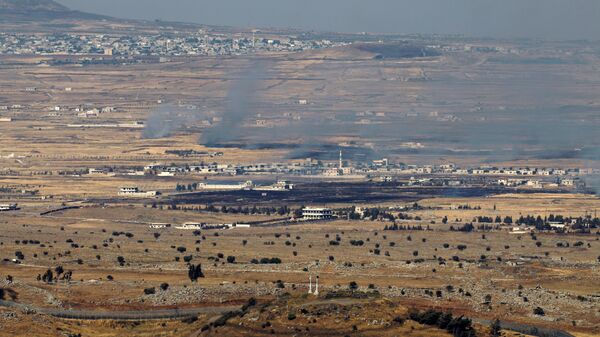 Israel has been strengthening its hold of the Golan Heights, occupied during the Six-Day War in 1967, despite the lack of UN recognition of its sovereignty over the territory. Tel Aviv stresses that the territory is a crucial buffer for ensuring the security of Israeli citizens.

US Senator from Texas, Ted Cruz, and Senator from Arkansas, Tom Cotton, have made a joint statement urging Washington to recognise Israeli's claims to sovereignty over the occupied Golan Heights. The two senators stress that the territory serves an important role in defending Israel from Iran and its allies.

"Responding to the threat posed by Iran and its proxies requires ensuring that Israel can defend its territory and its citizens from attacks […] To support Israel's right to self-defence, Washington should take the long overdue step of affirming Israeli sovereignty over the Golan Heights", the statement said.

The senators suggested a similar measure in the past in the form of a nonbinding resolution that called for recognition of Israeli claims to the Golan Heights.

Their latest call comes the day after Israeli Prime Minister Benjamin Netanyahu invited US National Security Adviser John Bolton to visit the Golan Heights and see why it's important for Tel Aviv that all countries recognise its sovereignty over the occupied territory. Bolton arrived in Israel to discuss the US withdrawal from Syria and reassure support for Israel.

READ MORE: Netanyauhu Thanks US for Opposing UN Resolution on Golan Heights

The Golan Heights were seized by Israel from Syria during the Six-Day War in 1967 and for a long time the territory was governed by an Israeli military administration. But in 1981 Tel Aviv decided to extend its laws to the occupied territory and established a civil administration there. The decision was condemned by the UN Security Council and labelled as illegal in terms of international law. Israel justified the move by saying it is safeguarding its borders from aggressive military acts by the country's neighbours.

This was the first time that Israeli authorities allowed Syrians and Druze, who maintained their Syrian citizenship, to cast votes. Still, the measure was met by protests in the Golan Heights, with Syrians burning election ballots and waving Syrian flags. Druze Arabs attempted to block the entrances to polling stations to protest against the elections, but were dispersed by Israeli police.