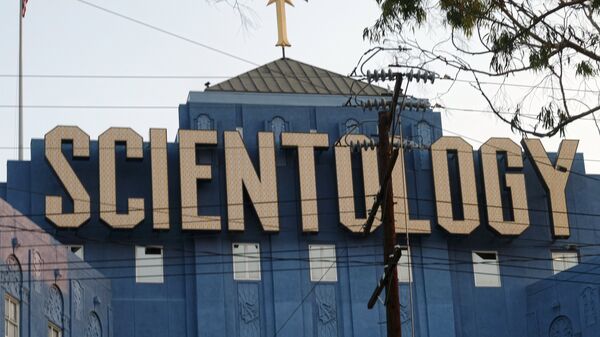 Scientologists believe that people are immortal alien beings who have forgotten their true nature and origins, and are trapped in human bodies on Earth.

In a leaked video, filmed during an allegedly secret meeting of Scientologists last month, "preacher" Michael Chan revealed some of the religious faith's secret "space opera" narratives, which are mainly shared only with high-level Scientologists.

The "preacher" tells adherents that trillions of years ago, they all used to be gods of their own universes before they were banished and imprisoned on Earth, forced to live an endless cycle of lifetimes trapped in human bodies.

“Early on the track you had your own home universe and you could create anything at will you wanted to. But you got a little bit bored — imagine being born into a life where anything you did became true. You’re shooting basketball a hundred feet away, nothing but net every time. You go fishing and only get big fish. At some point you got a little bit bored, it would be like Michael Jordan playing basketball with five-year-olds… So at some point you decide to join [your] universe with other spiritual beings to have someone to play with”.

Now, Chan claims, less powerful gods — or "thetans" as Scientologists brand them — are taking over — and Scientology must recruit new members to find the powerful "thetans" who he compared to Star War’s character Obi-Wan Kenobi. He alleged that they are "living among us".

Chan went on to say that Scientology branches — known as "orgs" — only managed to recruit one or two new members a week, while they need thousands of starters to find such "thetans".

The bizarre video was filmed in Athens in early December and shared with The Sun Online by Scientology expert Tony Ortega, who said that Scientologists are "not supposed to talk about the specifics of Scientology even to other Scientologists — it’s called verbal data".

"The founder Ron L Hubbard was very smart that way because he knew that if people talked about Scientology it would just sound crazy… The only person who has been talking about these wild and crazy ideas is Michael Chan, who is the nearest thing to a preacher they have — he goes around the world, to city after city to get Scientologists amped up and ultimately give more money. We knew this from descriptions but we never actually saw him in action because it’s all top secret — until this video", Ortega said.

Reflecting on Chan's words, Ortega elaborated that he "talks about how you ultimately became trapped in this body to the point you don't even remember that you were once the god of your own universe. And that's part of the goal of Scientology trying to remember all of those lifetimes to help you regain those godlike powers so you'll once again have power over matter, energy, space and time".

According to Ortega, the example of Obi-Wan Kenobi from Star Wars was only partially used metaphorically:

"He really seems to think Obi-Wan Kenobi is out there. And that's why it's so fascinating because I tell people this 'space opera' stuff and the Scientologists all deny it — but they can't deny this, this is their guy onstage talking openly about these ideas. That's why I was so, so happy to finally get this video”.

Ortega is also convinced that the video shows that Scientology, which claims to be the fastest growing religion, is, in fact, "in trouble" because it is only recruiting one or two new members a week.

"Scientology is in big trouble. It's been shrinking and shrinking. I talked to people that were former top executives who had access to enrolment numbers around the year 1990 — probably their biggest expanse — and they had about 100,000 people. Now I have two recent former defector executives who think it's no less than 20,000 around the world. They've never had the billions that they claim, never. They always just flat out lie about that".

Scientology, which calls itself a religious philosophy, was founded by American writer L. Ron Hubbard in May 1952. Scientologists believe that people are immortal alien beings (gods, or thetans) who have forgotten their true nature and origins, and are trapped in human bodies on Earth. Adepts believe that by taking classes and teachings, they can free themselves of their human bodies and reclaim their true selves.