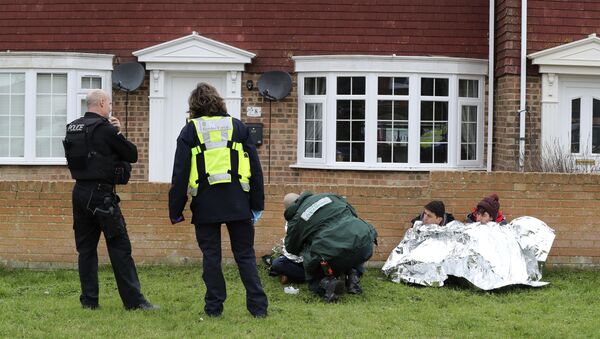 © AP Photo / Gareth Fuller/PA via AP
Subscribe
Last week, UK Home Secretary Sajid Javid turned to the help of the Defence Ministry with a request to deploy the Royal Navy in the English Channel to stem the flow of illegal migrants.

Kimberly Addy, 31, who witnessed the detention of several migrants right outside her house after they travelled across the English Channel in an inflatable boat, wrote on Facebook of her surprise at seeing such a development on the street.

"I was in the lounge feeding my baby when I saw the police outside. I saw the men there earlier but I didn't think anything of it. They were all walking around normally as if nothing had happened. But when police got here they seemed frail. There were only three of them here but I've heard eight of them were seen on the beach earlier. When the police came, they took their jackets off and police gave them foil blankets. An ambulance pulled up and police sent it away. I thought it was all a bit strange — I just saw it from my window. The men must have crossed through fields because they came in the opposite direction, not from Dungeness", Daily Mail cited her as saying.

The Coast Guard launched a search for illegal migrants in Kent on 7 January after discovering the empty dinghy on the beach at Dungeness on Romney Marsh in the morning. Once it became clear that no one had been left stranded in the sea, the maritime operation was over. But hours later, police and border force officials arrived at a residential street in Lydd with some of the migrants, Daily Mail reported.

"Border Force was contacted by HM Coastguard this morning, Monday January 7, at around 8.20am after they received reports of an unattended RHIB (rigid-hulled inflatable boat) at Dungeness, Kent. Border Force officers were deployed to secure the vessel. A search of the local area found eight people. Seven of those are now in Border Force care and the eighth has been transferred to hospital. A ninth man, who was also found in the area, has been arrested on suspicion of facilitating illegal entry to the UK. The incident is currently being investigated by officers from Immigration Enforcement’s Criminal and Financial Investigation team", a spokesperson for the Home Office said in a statement.

The operation comes amid mounting reports of illegal migrants trying to cross the Channel to reach the UK.

France Unveils Plan for Deterring Undocumented Migrants in English Channel
On 4 January, UK Defence Secretary Gavin Williamson said that Britain sought to deploy the HMS Mersey in the Strait of Dover to help stem the flow of illegal migrants to the United Kingdom via the English Channel, adding that London wanted to "help prevent migrants from making the dangerous journey".

Just a day before that, UK Home Secretary Sajid Javid asked Williamson to use the Royal Navy in the strait to help tackle the ongoing migrant crisis.

Speaking upon his visit to Dover, Javid said "a question has to be asked: if you are a genuine asylum seeker, why have you not sought asylum in the first safe country you arrived in?"

In December, Javid said that the situation should be treated as a "major incident" and announced plans to bring two Border Force cutters back to the UK to boost sea patrols.

"I have made a decision today to redeploy two of the Border Force's largest vessels, known as cutters, from abroad back to the UK, to southeast England, and they will be joining a cutter that is already there and two other coastal patrol vessels", Javid said.

000000
Popular comments
Americans don't have gardens. They don't know what a garden is. They have "yards". In the UK most people, as in this article, have gardens. Some American 'educated' person at sputniknews manages to pervert the English language by using nonsense American terms. Very annoying to read this trash as I want to see as little American foolishness as possible and hence never look at USA "News", but prefer to know what is going on in the world through Russian eyes. Thank you for not destroying a language with well established rules and customs.
KKeen
8 January 2019, 17:03 GMT
000000
Newsfeed
0
New firstOld first
loader
LIVE
Заголовок открываемого материала
Access to the chat has been blocked for violating the rules . You will be able to participate again through:∞. If you do not agree with the blocking, please use the feedback form
The discussion is closed. You can participate in the discussion within 24 hours after the publication of the article.
To participate in the discussion
log in or register
loader
Chats
Заголовок открываемого материала
Worldwide
InternationalEnglishEnglishMundoEspañolSpanish
Europe
DeutschlandDeutschGermanFranceFrançaisFrenchΕλλάδαΕλληνικάGreekItaliaItalianoItalianČeská republikaČeštinaCzechPolskaPolskiPolishСрбиjаСрпскиSerbianLatvijaLatviešuLatvianLietuvaLietuviųLithuanianMoldovaMoldoveneascăMoldavianБеларусьБеларускiBelarusian
Transcaucasia
ԱրմենիաՀայերենArmenianАҧсныАҧсышәалаAbkhazХуссар ИрыстонИронауОssetianსაქართველოქართულიGeorgianAzərbaycanАzərbaycancaAzerbaijani
Middle East
Sputnik عربيArabicArabicTürkiyeTürkçeTurkishSputnik ایرانPersianPersianSputnik افغانستانDariDari
Central Asia
ҚазақстанҚазақ тіліKazakhКыргызстанКыргызчаKyrgyzOʻzbekistonЎзбекчаUzbekТоҷикистонТоҷикӣTajik
East & Southeast Asia
Việt NamTiếng ViệtVietnamese日本日本語Japanese俄罗斯卫星通讯社中文（简体）Chinese (simplified)俄罗斯卫星通讯社中文（繁体）Chinese (traditional)
South America
BrasilPortuguêsPortuguese
NewsfeedBreaking
14:56 GMT'To Ban or Not to Ban': US Agencies Reportedly Split on Whether to Blacklist Huawei's Spinoff
14:28 GMTSotheby's to Hold First-Ever Art Sale Show in Post-Soviet Russia
14:19 GMTSpanish Island of La Palma's Airport Operating Normally Amid Volcano Eruption
14:11 GMTAt UN, Biden Boasts About 'Era of Relentless Diplomacy', Calls Military Power 'Tool of Last Resort'
13:34 GMT6.3-Magnitude Quake Rocks Chile
13:30 GMT'Promoting Safe Sex': Actress' Look at Emmy Awards 2021 Gets Compared to Condom by Netizens
13:12 GMTMoscow: US Failed to Discredit Russia's Electoral System
12:59 GMTWorld Leaders Participate in First Day of 76th UN General Assembly
12:54 GMTDaniel Craig to Exit James Bond Role, Says Next 007 Shouldn't Be a Woman
12:54 GMTRussia's Foreign Ministry Slams EHRC Ruling on Litvinenko's Death for Promoting Russophobia
12:34 GMTMoscow Blasts Britain’s Effort to Blame Russia for 2018 Poisonings as UK Charges Third Suspect
12:12 GMTSudanese Prime Minister Believes Coup Attempt Reveals Need for Army Reform
11:58 GMTEU Commissioner Warns ‘Something is Broken’ in Transatlantic Ties in Wake of AUKUS Sub Snub
11:58 GMTUK is 'Heading Back to Oligopoly' in Energy Sector, Bankruptcies on the Way as Prices Surge: Expert
11:51 GMTTop Pakistani Diplomat Calls for Unfreezing Afghanistan's Foreign Assets
11:47 GMTFrance Warns That AUKUS Submarine Row May Thwart EU-Australia Trade Talks
11:19 GMTRonaldo, Messi Comparisons Go Viral as Football Superstars Make Contrasting Starts at PSG & Man Utd
10:43 GMTTucker Carlson Lambasts US Army For 'Doing P.R. for Satanism' With COVID-19 Vaccine Promotion
10:38 GMTIndian Army Chopper Crashes In Jammu and Kashmir, Both Pilots Dead
10:37 GMTTrump Warns Border Crisis Turning US Into ‘Third World Nation’