'Devil on Uber App Made Me Do It': US Killer Pleads Guilty to Murders 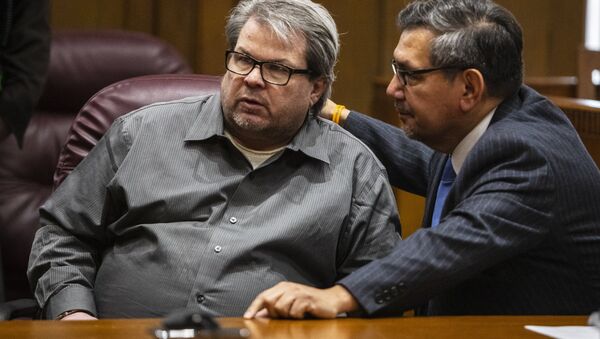 © AP Photo
Subscribe
One night in February 2016 six people were killed and two others, including a 14-year-old girl, were injured during a series of shootings in Kalamazoo, Michigan.

Jason Dalton, 48, had been due to face a trial for the murders but on Monday, January 7, he suddenly pleaded guilty to all of the charges, against the advice of his attorney, Eusebio Solis.

Dalton carried out the shootings between picking up rides as an Uber driver.

When he was arrested police said Dalton told them a "devil figure" on Uber's app was controlling him on the night of the shootings.

Mr. Solis had been urging him to maintain a plea of not guilty by insanity but Dalton — who had been ruled mentally competent to stand trial — dropped it at the last minute just as the last juror was being chosen for his trial.

"Yes, I've wanted this for quite a while," Dalton replied when Judge Alexander Lipsey asked if the pleas were voluntary.

"There are personal reasons for him. He does not want to put his family through that, or the victims' families, through the trial. It's his decision," said Mr. Solis.

On February 20, 2016 Dalton dropped off a group of people at an inn in Kalamazoo, went next door to a Cracker Barrel restaurant chain and opened fire.

Rich Smith and his 17-year-old son, Tyler, were shot and killed around three hours later at a Kia dealership as they looked at a pick-up truck.

Tyler's girlfriend, Alexis Cornish, was sitting in a car when the pair were killed but police said she was "extraordinarily brave" because she rushed over to her dying boyfriend and then called 911 with a phone she found in his pocket.

Abigail Kopf, 14, was shot in the head during the restaurant shooting but survived.

Tiana Carruthers was the eighth victim, but she also survived her injuries.

Kalamazoo is an unremarkable town halfway between Detroit and Chicago.

Dalton, the father of two children, supplemented his income as an insurance adjuster by working for Uber. He had no previous criminal record before the shootings.

Prosecutor Jeff Getting said "everybody wants to know" what motivated Dalton but he has not so far given any details of the night, other than what he said to police when he was arrested.

Gun shop owner Jon Southwick said Dalton bought a jacket with an inside pocket designed to hold a gun just hours before the rampage but said he was "laughing and joking" at the time and gave Mr Southwick a "one-armed hug" before he left.

"Nothing that we can say is adequate, but please know that our hearts are broken by the suffering which has resulted from the actions of our son and former husband," said Dalton's ex-wife and relatives in a joint statement after the shooting.

Dalton will be sentenced on February 5 and his victims' relatives will hope he might explain what motivated him or whether he really did see the Devil on his Uber app.