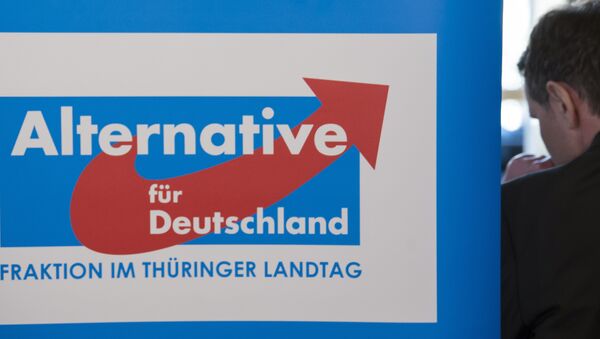 © AP Photo / Jens Meyer
Subscribe
Police are searching for men, who knocked down and beat the leader of Bremen’s branch of the conservative Alternative for Germany, lawmaker Frank Magnitz, following a recent string of attacks against his party in the Eastern state of Saxony, including a blast outside their office in Doebeln last week.

Chairman of the right-wing Alternative for Germany party in the state of Bremen and member of the Bundestag (German Parliament) Frank Magnitz was attacked by three masked men in the city centre. Shortly after he left a local newspaper's New Year's reception, the perpetrators knocked the 66-year-old down with a wooden plank and continued kicking his head until a construction worker, who happened to be nearby, intervened.

According to AfD, who published the photo (Warning! Graphic Content!) of the unconscious victim from a hospital, he was severely injured. The police and persecutors have launched an investigation, searching for the attackers and calling on possible witnesses to come forward and contact investigators. Considering Magnitz’s position, the police have stated that they assume, the crime was “politically motivated”, the German media report.

AfD stated that they are shocked and are calling on the police to find the perpetrators, they refer to as terrorists. In the statement, published on their website, they also accused the left-wing party Die Linke as well as the Social Democrats and the Greens of supporting Antifa and their attacks.

German politicians from rival political parties have reacted with shock and condemned the attack. Former Green Party co-chair Cem Özdemir expressed hope that the perpetrators will be punished.

​“There is no justification for violence, also against the AfD. Whoever fights hatred with hatred let hatred to win in the end. #nazisout but with the methods of our rule-of-law state”, he tweeted.

The assault against the AfD lawmaker came hot on the heels of a series of attack on the party offices in Saxony and less than a week after an explosion in front of its seat in Dobeln there. The AfD office building as well as two neighbouring buildings and two parked cars were damaged but nobody was hurt in the incident.

Police detained three men during the course of the probe over the blast, but all were later released due to a lack of evidence to keep them in custody.