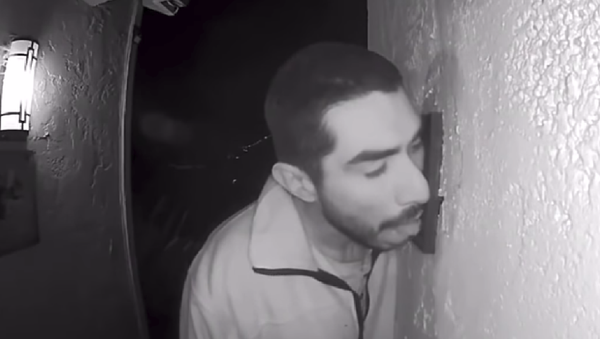 "why is it creepy for a man to lick your doorbell for 3 hours? Its not illegal!" — something only a man would say

​The camera mounted by the front door revealed the culprit: 33-year-old Roberto Daniel Arroyo, who had been at the front door since roughly 2 a.m., intensely licking the Dugans' doorbell.

Yeah, that's right. Don't believe us? Here's the footage. And if that's not enough, here's a bit more.

​"Never have we seen anything like this," neighbor Stephanie Rosario told KION.

Other camera footage shows him relieving himself elsewhere on the property, Heavy reported.

My doorbell only works when you lick it, anyway.

​"You kind of laugh about it afterwards because technically he didn't do anything," Dungan said, noting, "This just kind of reinforces how important it is to have security within your home."

It should only take 20 min to lick that doorbell clean. Disturbing, indeed.

​Salinas Police Department tracked Arroyo down and is weighing misdemeanor charges against him for prowling.

Public Information Officer Miguel Cabrera described Arroyo as "transient," without a permanent address, noting he wasn't arrested after police questioned him but that the case had been forwarded to the district attorney's office.

Twitter had a field day upon discovering the weird story.

I remember my first doorbell lick…

​How many licks does it take to get to the center of a doorbell? Definitely more than three hours: not a dent was made in this one!

how many hours does it take to lick to the tootsie roll center of a doorbell? pic.twitter.com/jgTA8pabHN

​Of course, Twitterers have standards even when it comes to doorbell licking. One wouldn't want to be uncouth, after all…

I never lick a doorbell longer than five minutes. A lady needs standards!