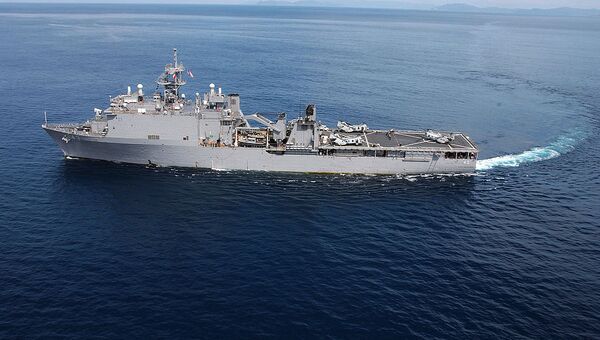 "Between January 7 and 10, the USS Fort McHenry (LSD-43) amphibious assault ship is visiting the port of Constanta and will be stationed for three days at the passenger pier. After leaving the port on Thursday, January 10, USS Fort McHenry and the frigate Regele Ferdinand (Romania) will hold joint exercises in the territorial waters of Romania and the international waters of the Black Sea," the statement says.

Romanian General Staff noted that during the visit, representatives of the US ship will meet with the command of the Romanian fleet, and the detachment of soldiers from the 307th Marine Battalion will make a reference visit aboard the US ship.

Russian Patrol Ship Monitoring USS Fort McHenry's Actions in Black Sea – MoD
Earlier, official US outlets said that the US amphibious landing ship Fort McHenry has sailed through the Dardanelles Strait on a visit to Romania, making it the first US Navy warship to enter the Black Sea since the Kerch Strait crisis last November.

The US military newspaper Stars and Stripes noted that the Fort McHenry was the first Navy warship to enter the Black Sea in five months.

"This is the first Navy ship to enter the Black Sea since August, when the USS Carney, an Arleigh Burke-class destroyer, and the fast-transport vessel USNS Carson City worked separate missions there," the newspaper said.

The Fort McHenry first visited the Romanian port of Constanta and is a member of the Kearsarge Amphibious Ready Group, which includes the Wasp-class amphibious assault ship Kearsarge and the San Antonio-class amphibious transport dock ship Arlington, the report said.

000000
Popular comments
Will they crash it like the Norwegian ship?