‘Are You F**king Kidding Me?!': US Officer Shoots ‘Aggressive' Chihuahua (VIDEO) 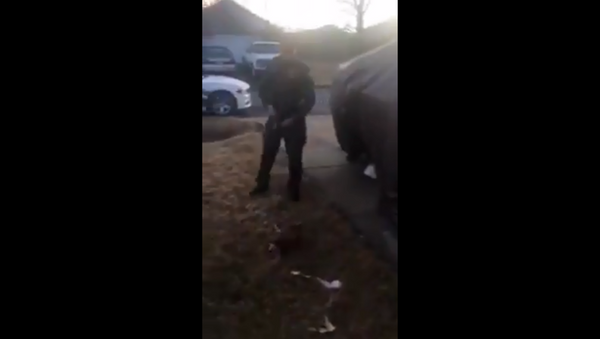 The shooting took place Friday after Wallace and his partner arrived at the Shiloh Estates subdivision to address a complaint about an aggressive dog.

Cellphone footage recorded by Doug Canady, the owner of the Chihuahua, starts after he's already engaged in a conversation with the responding officers. Three seconds after Canady informs Wallace that he does not want to "step onto the road," the officer discharges his department-issued firearm at the small dog.

While the dog, since identified as Reeses, is rolling on the grass in pain, Wallace responds to Canady's yells with a simple, "I told you." He later approaches Canady with a stun gun in hand to prevent him from re-entering his home.

Additional footage of the confrontation shows Canady calling for his lawyer and the county sheriff to be contacted, stressing that he will be filing a complaint over the matter.

​"Shooting a dog on my yard, on my property, discharging a weapon? I'm not talking to you, no," Canady says before urging officers to question an unidentified woman who pointed a gun at Reeses and his home. Officers later explained that the woman did have a permit to carry a concealed weapon.

"Three feet in front of me shooting a gun, why don't you go ahead and put the dog out of its misery… That dog has never attacked anybody… and the dog is still walking around, suffering," he added.

The video cuts off as Reeses manages to walk back onto Canady's porch.

Responding to outraged residents, the sheriff's office took to Facebook on Friday to comment on the shooting, calling the event "an unfortunate incident" in which one of its deputies fired his weapon at an "aggressive dog." At the time of the first posting, Wallace was placed on paid administrative leave pending an investigation.

However, the following day, a second Facebook post was shared, revealing that Wallace had been dismissed from the force.

"Since taking office in 2017, I have been an advocate of integrity, professionalism and transparency. I hold my Deputies to the highest of standards to protect and serve the residents of our community," Sheriff Tim Ryals wrote. "Unfortunately, a Deputy fell short to those standards."

"As a result of the incident that occurred on January 4, 2019, in the Shiloh Estates Subdivision, Deputy Keenan Wallace has been relieved of his duties at the Faulkner County Sheriff' Office.
We in Law Enforcement answer calls every day that require split second life and death decisions. We strive to be right 100 percent of the time," Ryals added.

​As for Reeses, she's currently in stable condition and receiving treatment at a local area veterinary office. A GoFundMe campaign, which was launched on Friday, has collected more than $15,000 for her medical expenses.