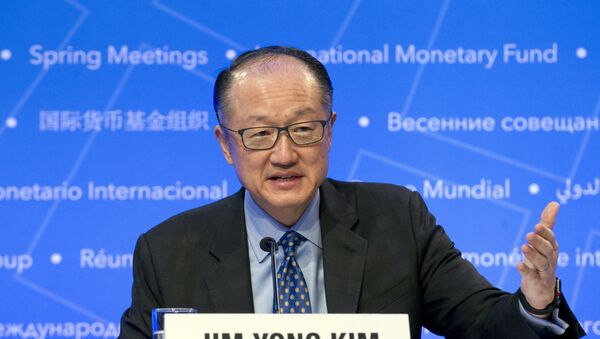 The World Bank has announced that Kristalina Georgieva will assume the role of interim president effective February 1. The organisation also confirmed that Jim Yong Kim had stated his intention to resign on the same date.

"World Bank Group President Jim Yong Kim today announced that he will be stepping down from his position after more than six years", the statement said. "Kristalina Georgieva, World Bank CEO, will assume the role of interim President effective February 1".

Shortly before that, Reuters reported, citing sources, that Jim Yong Kim, the current president of World Bank, had informed the organization's board that he would resign from his post effective February 1.

‘An Economy In Extreme Difficulty': US Jobs Report Hides Economic Truths
As the news agency specified, the outgoing president is set to immediately join a company and focus on improving infrastructure in developing countries.

READ MORE: Outdated Financial Model: Why Russia Refuses to Give Money to the World Bank

000000
Popular comments
The battle for control of Asia develops... A new consolidation of banks subordinate to the American Empire is preparing to confront Beijing-based Asian Infrastructure Investment Bank (AIIB) and the Eurasian Development Bank (EDB). The current organization of USA-dominated World Bank is not sufficiently functional to confront these new dynamic sources of funding. New organizations must be formed. Mr Jim Yong Kim rides to the rescue...

Ambricourt
7 January 2019, 20:57 GMT1
000000
Ambricourt, A very interesting comment. Thanks for that. I imagined his early departure meant something evil is coming down the line and that he was just getting out of the way.