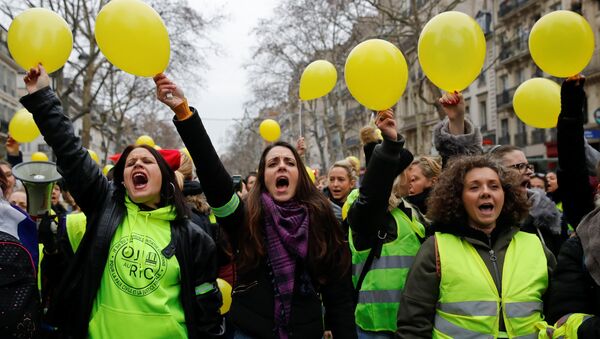 Following an eighth consecutive weekend of protests against high living costs in France, marked by clashes with police, Italian Deputy Prime Ministers Luigi Di Maio, the leader of the Italian anti-establishment party Five Star Movement (M5S), and Matteo Salvini, heading the anti-immigrant League, have voiced their support for the protesters.

“I support honest citizens who protest against a governing president [who is] against his people”, he stated, at the same time firmly condemning the violence at the rallies, as cited by RT.

His coalition partner, M5S leader and Italian Minister of Economic Development Luigi Di Maio, also endorsed the "yellow vests" movement and lambasted Macron’s government for protecting the interests of the elite and not proving to be up to the expectations of the people. He wrote an open letter to the protestors on his party’s official blog, which began with the call “Yellow vests, do not give up!” going on to write that his M5S was ready to give them the support they need.

“In France, as in Italy, politics has become deaf to the needs of citizens who have been kept out of the most important decisions affecting the people”, he said, pointing out that it “is the same spirit that fuelled the 5 Star Movement and thousands of Italians”.

He also echoed claims by one of the most well-known representatives of the "yellow vests" movement, Jacline Mouraud, about establishing a political party, and pointed out that “despite the insults and sneers, the M5S has entered parliament, and those who teased them, have disappeared from the political scene”.

At the same time, he strongly condemned those who have resorted to violence during the demonstrations, but expressed his belief that the movement itself is peaceful.

“A new Europe is being born. One of the yellow vests, of direct democracy movements. It is a hard battle that we can fight together”, he concluded promising to assist with organising a Rousseau-inspired system of direct democracy.

Rallies against high living costs have continued for an eighth consecutive weekend, with at least 50,000 people protesting nationwide. On 6 January, some 3,500 protesters took to the streets of Paris.

The wave of so-called “yellow vests” protests — named after high-visibility jackets mandatory for French drivers to keep in their cars — started in mid-November. While the French government has scrapped its planned diesel tax hike, which is what initially sparked the protests, the "yellow vests" have evolved into a broader movement against the government’s policies and rising living costs. The rallies have been marked by violent clashes between protesters and the police.