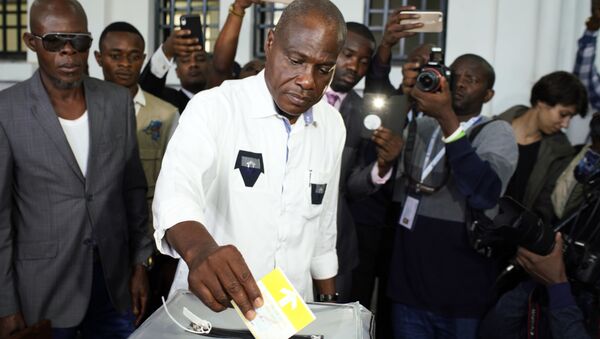 BRUSSELS (Sputnik) - Belgian Foreign Minister Didier Reynders has warned of the possible imposition of sanctions against the Democratic Republic of the Congo (DRC) by the international community over a delay in announcing the results of the country's presidential and parliamentary elections.

"The sanctions of the international committee [UN Security Council] are already in force. The imposition of new [sanctions] will depend on the situation's development", Reynders told Belgium's RTBF.

The DRC's citizens elected the country's president and members of the parliament on 30 December, while the results were due to be announced on 6 January.

However, the country's election commission has not announced the results, saying that only 47 percent of ballots from polling stations have been received so far.

US President Donald Trump said in a letter to congressional leaders, that the United States has deployed 80 military personnel to Gabon in response to violence in the Democratic Republic of the Congo (DRC) related to the recent election, saying the troops will remain in the region until the security situation in the DRC no long requires it.

READ MORE: 80 US Troops Deployed to Central Africa Over Concerns of Violence in Congo

Africa
Congo Electoral Commission Plane Crashes Near Kinshasa, Killing 6 - Reports
The elections in the DRC should have been held on December 23, however, the election commission postponed them until December 30 since ballots and protocols for the vote had not been delivered on time.

A total of 21 people ran for president in the country. DRC President Joseph Kabila, in power since 2001, did not standing for re-election since he is not allowed to hold the presidential post for a third consecutive term. His party has designated former interior minister Emmanuel Ramazani Shadary as its presidential candidate.