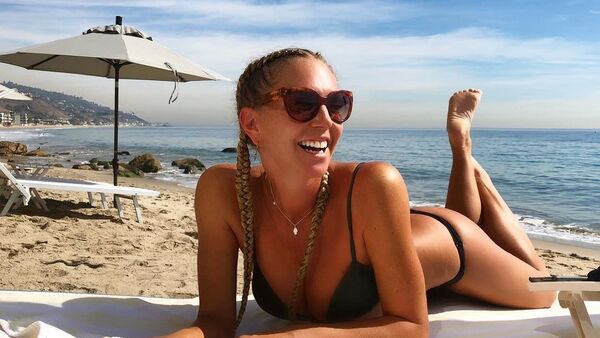 Annalise Braakensiek shot to fame at the age of 16, appearing on the covers of magazines, playing in soaps, and shows on TV. In recent years, she plunged herself into charity work and became an ambassador for a suicide prevention group while she was trying to get over the deaths of her friends and grandfather.

The body of Australian model Annalise Braakensiek is believed to have been found in her Sydney’s Potts Point flat after her friends raised concerns about her welfare. According to the local police, as cited by the Australian branch of The Guardian, the formal identification and a postmortem examination to define the cause of her death have yet to take place; however, there are no apparent suspicious circumstances.

The 46-year-old Australian celebrity, whose modelling career kicked off, appeared on the covers of a number of magazines, was the face of brands like Nivea, La Perla, Lee, Levi’s and Toyota, but then switched to TV shows. She made appearances in episodes of Home & Away, Heartbreak High, and played one of the characters in the SBS comedy series Pizza.

She also worked with several charities and became an ambassador for the suicide prevention group R U OK?, encouraging people to be attentive to their loved ones, who might be prone to depression. The organisation has expressed their condolences.

The R U OK? team are devastated to hear of the loss of much loved and respected R U OK? Ambassador Annalise Braakensiek. Our heartfelt condolences are with her friends, family and all those whose lives she touched. pic.twitter.com/ovTSm3d1Nw

​Over the course of her work for R U OK?, Braakensiek was open about her personal experience of living with depression following the deaths of her two friends, who killed themselves, and losing her grandfather over a short span of time.

“Very few people asked me ‘was I OK?’ And when I did say [I wasn’t], they ran. I was so shocked by the reaction of so-called friends – the aggression, the lack of support. That’s when I really realised the negative stigma with mental illness is rampant. People have that real ‘what have you got to be depressed about?’ [attitude]”, she told the Sydney Morning Herald in 2017.

Less than a month before her death, Annalise Braakensiek, who divorced her husband in 2018, posted on her social media that “everything seemed to feel twisted and upside down at the moment”.

“Life’s challenges have been deep, dark, difficult, demanding and downright scary lately. For me and so many others I know. But today is a new day!” she wrote on her Instagram, also thanking those who had “carried her through this turbulent year”.

The answer is blowing in the wind…… Hanging in there by the hair on my chiny chin chin…. 😜 Sheesh it’s been a challenging year for so many of us, am I right?!?! My biggest challenge was not having my own home (for a year now)!!!!?!! As you know I L❤️VE to cook organic meat free @annalisewithlovelunch creations and I can not wait to get back into my own kitchen again in just a few weeks!!! 🚀 🌿 🌶 I am uber grateful for all the legends who have taken me under their wings this past year, and into their hearts and homes @gina_b21 and family especially. 🙏🏼💙 The rest you know who you are. I love you. Beyond. Including my bestie in heaven. A day doesn’t go by when I don’t think about you 😓 I don’t know what I’d do without you all 🙏🏼 And I promise as soon as I move into my new abode I’ll be back to cooking, sharing my new jewellery designs and being a general all round mega Vikingess! 💪 🦄🌈 In the meantime for all of you who have asked….as of next Wednesday I will be able to fulfill my signature jewellery design orders again!!!!!! #yay!!!! Just in time for Christmas 🎄 DM me re new designs not yet shown or up on my site and check out my jewellery gallery at link in bio and use my F&F code “mylovelies” for 25% discount…. sharing the love 💙💙💙💙💙💙💙💙💙 And love the team who shot this campaign and can’t wait to shoot my new collection soon! 🙌🌈 📷 my talented sister @beccafitzgerald_photo Cruelty free @ereperezcosmetics 💄 by the magical @the_travelling_artist Hair: @originalmineral natural colour styled by the insanely fab @yadgiahair Brows by the best: @parlourb Vegan facial by the amazing @dermaglow_medi_spa and styled by the most divine and talented @stephmalizisstylist for @cmstylists..magical day your way my lovelies 🙌💫🌙✨⚡️🔥.. #annalisebraakensiek #jewellery #designer #jewelry #model #vegetarian #cook #jewellerydesigner #boholuxe #bohostyle #ecofriendly #handmade #madewithlove #mydesigns #lovelunch #2018 #bringon2019 #wegotthis #love #strength #support

Her death moved many to tears, as they posted heart-warming words and condolences on Twitter.

I'm very saddened to hear of the passing of Annalise Braakensiek — it truly goes to show that anyone can be dealing with their own battles, regardless of who they are, or how well known they may be. Passing on… https://t.co/v1uVjL1ZtA

So sad to hear the passing of Annalise Braakensiek. I will remember her awesome smile and great sense of humour. So many times in my presentations I have used this very photo to remind people it's ok to ask for help. RIP beautiful lady. pic.twitter.com/Iqgp3oLLbD

Wow! Shocked by this news, I was just thinking of you today and how I thought you had it all…you were so beautiful #AnnaliseBraakensiek

Incredibly tragic news to break this eve: the death of the dynamo who loved everyone; didn’t have a bad word to say about anyone & just rocked. RIP beautiful soul — Annalise Braakensiek @ABraakensiek 🙏🏻💔https://t.co/X83JqlFFwN #RIPAnnalise pic.twitter.com/iWBFPzQPWv

​Some thanked her for her charity work battling depression.

#AnnaliseBraakensiek Such sad news. As a sufferer of #depression #panicanxietydisorder, you did SO much to help @ruokday.
R.I.P. Annalise. pic.twitter.com/p7PT2OsSCR

So very sad to hear about #AnnaliseBraakensiek
Rest In Peace. I would like to make some films about mental health. @ruokday @beyondblue let’s chat