Maduro to Swear in Before Supreme Court, US Denounces Upcoming Inauguration 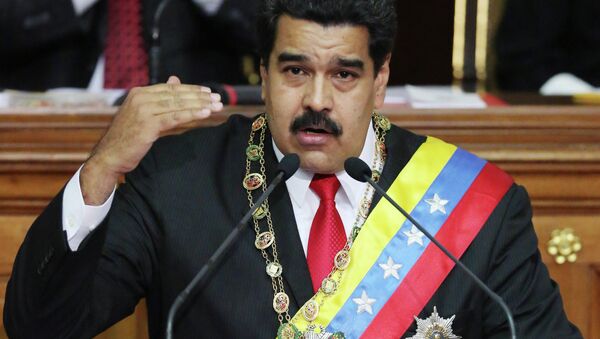 MEXICO CITY/MOSCOW (Sputnik) - Venezuelan incumbent President Nicolas Maduro will be sworn in for the second six-year term on January 10 before the country's Supreme Court and not before the National Assembly, which is controlled by the opposition, Diosdado Cabello, the president of Venezuela's National Constituent Assembly, said.

"They [the National Assembly] have lost their legitimacy after disrespecting the constitution and other branches of power," Cabello said as quoted by the Nacional news portal.

Caracas Claims Lima Group Encouraging Coup in Venezuela - Reports
The National Assembly has had an opposition majority since January 2016. The Constituent Assembly, which is made up of Maduro loyalists, was elected in July 2017 and is tasked with rewriting Venezuela's constitution.

Maduro won the May 20 elections which had been widely condemned as illegitimate. At a meeting in Peru on Friday, the Lima Group of Latin American countries plus Canada denounced Maduro's second term.

Meanwhile, US State Secretary Mike Pompeo has welcomed the decision of the Lima Group of Latin American countries plus Canada not to recognize the upcoming inauguration of Maduro.

"The U.S. applauds the Lima Group for standing up for democracy in Venezuela and denouncing Maduro's upcoming sham inauguration. The elections in Venezuela were flawed, unfree, and unfair," Pompeo said on Twitter.

The Lima Group, which comprises 12 member states, was established in August 2017 to push for democratic reforms in Venezuela.