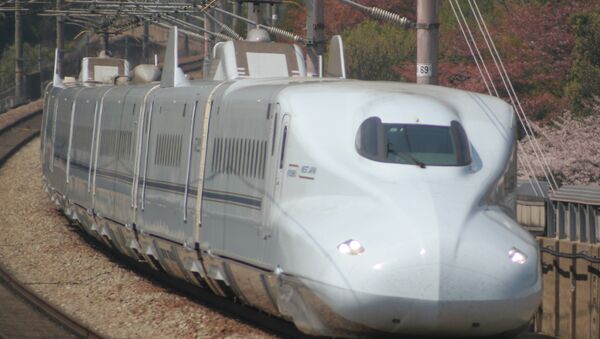 © ja.wikipedia.org
Subscribe
International
India
Africa
Central Japan Railway (JR Central), one of five bullet train operators in the nation, has announced that it will test the new N700S shinkansen at speeds of up to 360 kph, ahead of a planned 2020 debut.

JR Central President Shin Kaneko noted that the railway firm intends to conduct its first test of a new N700S high-speed bullet train this year, according to a report by the Japan Times.

Set to debut on the Tokaido Shinkansen line — linking Shin-Osaka Station and Tokyo Station — in 2020, the 360 kph N700S will travel far more quickly than current bullet trains operating at a maximum speed of 285 kph.

"We aim to carry out test runs at 360 kph this year so that we can demonstrate safety when we export the train to such markets as the United States and Taiwan," Kaneko stated, cited by The Japan Times.

The Japanese rail chief observed that, as some 30 percent of reserved seats on both its Tokaido Shinkansen and Sanyo Shinkansen lines are smartphone-based ticketless purchases, new measures to bolster online reservations will be included in the S700N rollout.

"Personally, I hope that a ticketless system will be introduced also for the Chuo Shinkansen line," he added, referencing a new line slated for 2027 that will connect Nagoya with Tokyo using magnetically-levitated (maglev) rail technology.

The JR Central head also asserted that construction for the much-anticipated maglev route had begun.

"We have secured more than 50 percent of land needed for the maglev work on the west side of Nagoya Station, and are now in talks with landowners for the east side of the station," he noted, adding, "we'll continue making all-out efforts."

Known throughout the English-speaking world as the bullet train, Japan's conventional Shinkansen is a 2,764.6 km network of high-speed railway lines across the island nation incorporating cutting-edge technology and building materials.