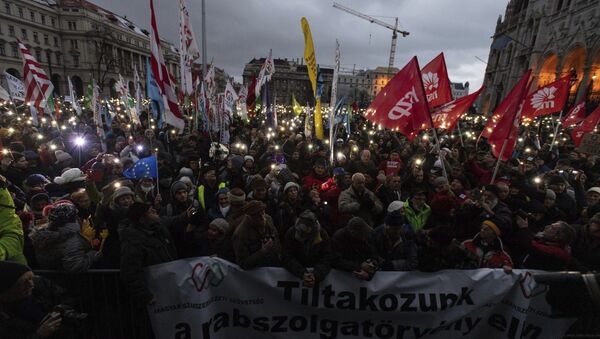 An estimated ten-thousand Hungarian protesters took the streets of Budapest this weekend denouncing the country's new labor code, which increases a workers’ allowable overtime from 250 to 400 hours a year, in a move that union leaders have dubbed the “slave law.”

Union workers claim that the law, proposed by Prime Minister Victor Orban's right-wing Fidesz party, seeks to increase Hungarian company profits at the expense of workers by adding an extra workday per week.

While some protested new courts that many have noted are easily manipulated by the PM, others attacked state-controlled media.

"The TV is lying," protesters yelled while others carried banners with the phrases "sweep away the regime" or "national strike," the Guardian reported.

"We disagree with almost everything that is going on since this government got into power, from corruption to pseudo-democracy," Eva Demeter, a 50-year-old protester, told Reuters.

Last month, the governing Fidesz party declared that "criminals" were behind "street riots" while accusing Hungarian-born billionaire philanthropist and investor George Soros of fueling the protests.

According to a Hungarian journalist who spoke to Sputnik last month on condition of anonymity, the new labor law is within the EU framework.

"Four hundred hours overtime is less than the EU directive, and is customary in other EU countries. Any hours of overtime, beyond the normal framework of working hours, will have to be paid for monthly also in the future, and the rights of trade unions likewise have not been curtailed, they have been extended by virtue of the fact that any departure from the twelve-month overtime framework is only permitted in the case of a collective agreement. There's always some dissatisfaction when governments withdraw some limitations imposed on the capital," the journalist asserted, cited by Sputnik News.