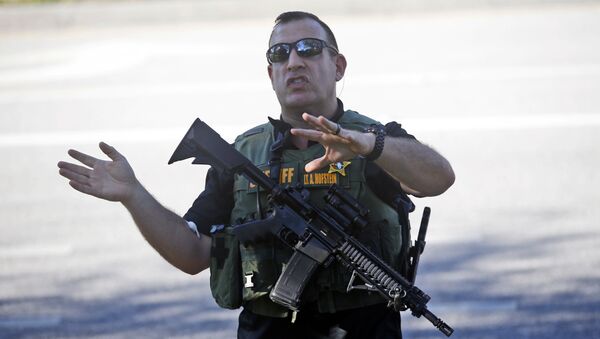 The shooting at the Douglas High School in Parkland, Florida, which took place on 14 February 2018, is considered to be one of the deadliest in US history. The perpetrator, Nikolas Cruz, killed 17 people and injured 16 more using a semi-automatic AR-15 rifle.

A panel appointed by the state of Florida to study the Parkland school shooting, tasked with determining the best way to prevent future shootings in the US and to reduce the number of victims, released its final report, arriving at a sensational conclusion. The government panel was unanimously in favor of arming trained and selected teachers at schools as a means to deter or stop potential future assailants. Members of the Florida state panel came to the conclusion that inadequate responses by school personnel and local police were the reasons that the number of casualties was so high.

The idea led to a furious reaction on social media, with many people opposing arming teachers.

It's embarrassing that the unanimous recommendation is to arm teachers. Forget higher salaries, forget education overhaul. Put another gun in a high stress environment.

Some suggested that bringing more guns to schools couldn't be the solution to the problem.

Actually, more people die from accidental shootings than from terrorist activities. Not sure introducing guns in schools is a great idea. We will never be 100% safe but why add risk?

Many twitterians expressed fear that modern US schools are slowly turning into prisons.

How about turning schools into prisons. Blows my mind that the answer to gun violence is more guns, armed guards, walls, teachers trained to kill. Enough with this crazy cult.

Locked perimeter fences, armed teachers. Are they talking about a prison or a school?

One user noted that the panel hadn't even considered the possibility of introducing laws that would control or reduce the amount of guns in circulation in the US.

There has been a National and State safety commission out of Parkland. Both did great investigatory work, but, both refused to look at the role of guns in this incidence of gun violence and yet both are recommending more guns without any evidence it is a good idea. Why?

READ MORE: Half of US Voters Back Trump Call to Arm Teachers for Students Protection — Poll

Many netizens suggested that the report was written to benefit the National Rifle Association (NRA).

Bet you that panel is full of NRA members

Sponsored by the NRA

At the same time, the proposed measure had strong supporters.

Everyone should read minute by minute account of #Parkland shooting released 12/28/18. So disturbing how almost every adult failed the kids & their families. Sadly, we know deep down 1000% our son's district's not AT ALL prepared for mass shooting or anything crisis related 😣

Some noted that the measure wouldn't arm teachers forcibly, but would provide them with the opportunity.

Its a dishonest argument. No one is for forcing teachers to be armed. All anyone is suggesting is that teachers CAN get training and be licensed to carry a gun to protect their students. The other option is spending hundreds of millions to increase security around schools.

Nikolas Cruz entered the Douglas High School in Parkland, Florida carrying an AR-15 semi-automatic rifle and started shooting students and school staff indiscriminately. The shooting claimed the lives of 17 people and left 16 more wounded. After his rifle jammed, Cruz left the school but was later apprehended by police.

The shooting reignited public debate about the necessity of stricter regulation of firearms in the US, with advocates of gun control often accusing politicians, including the US president, of being "bought" by the NRA and protecting their interests. The US was rocked by numerous mass shootings throughout 2018.

An active shooter was recently also reported at the Mississippi University for Women on 4 January 2019. At least one person was injured in the attack, but the campus was put on lockdown for several hours.