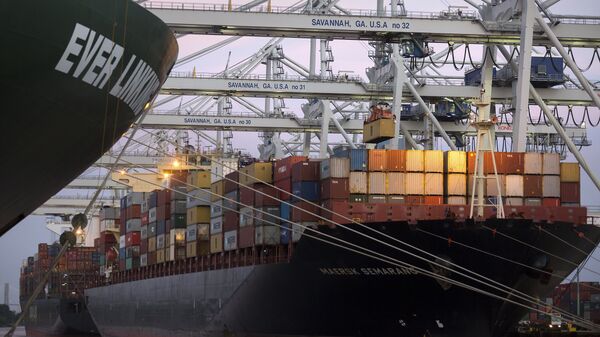 © AP Photo / Stephen B. Morton
Subscribe
International
India
Africa
MOSCOW (Sputnik) – Those who spot the lost containers should not approach them and should call the emergency services, the German maritime emergencies agency said.

During a storm on Wednesday, the cargo vessel MSC Zoe lost over 270 containers, one of them contained 7.7 tonnes of benzoyl peroxide and 1.5 tonnes of lithium-ion batteries, the agency said.

Asia
Blogger Sentenced to 7 Years in Prison For Reporting on Toxic Spill in Vietnam
The severe storm caught one of the world’s largest container ships  as it was sailing under a Panamanian flag from the Dutch port of Antwerp to the German port of Bremerhaven.

"Two 20-feet containers with hazardous cargo fell into the sea", the agency said. The authorities noted that one of the containers included 280 boxes with benzoyl peroxide while another one had 457 boxes of lithium-ion batteries inside.

What a disaster. 270 containers lost overboard from the #MSCZoe, one of the world’s largest container vessels, in a storm. Now the contents are washing onto Dutch beaches. Much will sink to pollute the ocean. pic.twitter.com/OxNXno2F2Z

If a container with benzoyl peroxide is damaged, the substance will sink down to the bottom, thus limiting the risks to marine life. However, the threat will be bigger if a container is brought ashore, according to the agency.

A container ship lost 30 containers on the Northsea llast night. Anyone need a Mercedes rear light or an IKEA Fullsmockåd? #terschelling #MSCZOE pic.twitter.com/Qse4QqmaoZ

The MSC shipping company, for its part, said it has set up a clean-up operation concentrated around the Dutch and German coastlines, due to the container spill from MSC Zoe.

The plastic toys (and other rubbish) from the containers lost at sea yesterday are also washing ashore on the mudflats of the Wadden Sea. Here apparently currents sorted out blue dumptrucks #MSCZOE #Waddenzee pic.twitter.com/CiLjaoK4Um

"In close collaboration with local authorities, MSC is now working with a number of salvage companies to add momentum to the quick response started on 2 January. In some locations, MSC is also taking over contracts initiated by local authorities as part of an emergency reaction to the incident, in order to provide a sustained and effective response operation", the company said in a statement.

The statement noted that special equipment was being used in the operation.