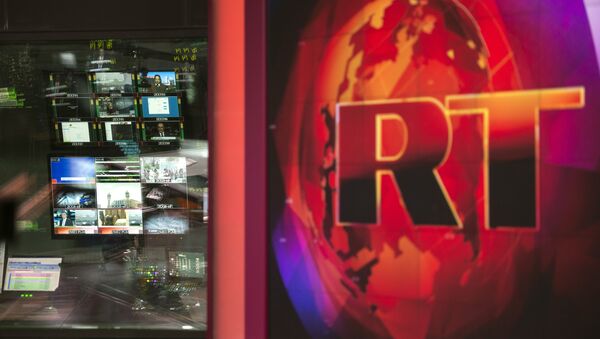 MOSCOW (Sputnik) – The Anonymous hacktivist group released reports on the activities of the Sputnik news agency and RT broadcaster, as well as invoices for writing them, as part of a new batch of documents of the UK state-funded Integrity Initiative hybrid warfare project.

The group revealed documents and invoices, which it claims are the evidence showing that the Integrity Initiative project carries out analysis of the activities of the RT broadcaster, with the use of UK taxpayers' money.

Anonymous Releases New Docs Detailing London's Info Projects Against Corbyn, RT
Earlier on Friday, Anonymous published the copies of invoices for the payment of a total of 1,000 pounds, issued by Jassar Jamal Al-Tahat from Amman, Jordan, for the creation of "a report on RT media campaign for the Integrity Initiative."

The group also released two reports on the activities of RT. One of them, compiled by Al-Tahat, represents an assessment of RT in the Middle East and North Africa, formed in April 2018. The other one, whose author is not specified, is dedicated to the principles of spreading news via social media and acknowledges social media successes of RT and Sputnik.

The hackers called the first report "Plans for opposing the RT" and the second report "Reasons why they oppose the RT."

Explosive Docs Released by Anonymous Look Authentic - Cyber Security Expert
One of the reports was dated April, while the date of the creation of the other paper is not specified. The invoices were dated 15 April, 18 and 21.

According to one of the reports, "RT is currently seen as the most trusted source giving ‘the other side of the story’" and suiting the recent developments in the region, especially due to the fact that local intellectuals had for long faced the domination of the Western narrative and "their main concern now is to see a different side of the argument."

The author of the report also pointed to "a margin of acceptance and tolerance of its professional short comings that Western media outlets do not enjoy."

The other paper detailed social media successes of RT and Sputnik amid the "growing mistrust of western media among westerners" and listed two target audience groups of Integrity Initiative.