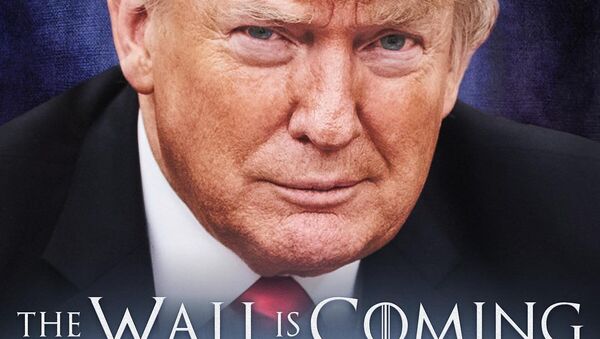 © Photo : Instagram / realdonaldtrump
Subscribe
Donald Trump has thrown out a teaser for the construction of his cherished wall at a time when Democrats and Republicans are divided over his proposed border deal.

The POTUS has shared a poster showing himself and the "big, beautiful wall" he wants to build on the US-Mexico border to stop illegal immigrants from entering the country.

The tagline, which features a Game of Thrones-esque gothic font, reads "The Wall Is Coming" — a reference to one of the series' catchphrases, "Winter Is Coming". A wide range of Trump followers enjoyed the meme.

"This is so epic", wrote one user.

"The next season of Game of Thrones looks lit", joked another.

However, a number of social media users rushed to remind Trump that in the last season of the series, the wall that had protected the human kingdoms of Westeros from the dangers of the frozen north was destroyed by an ice-breathing dragon.

Trump talking about "The Wall is Coming"

trump is using the #GameOfThrones meme to say “The Wall is Coming.”
But I guess nobody told him what ends up happening to the wall.

…maybe #SpeakerPelosi will help him out with that.

This comes as a partial US government shutdown is crawling into its third week, as Congress failed to pass a proposed spending bill that had included the $5 billion that Donald Trump had requested for the construction of a wall on the country's southern border — one of his most controversial and widely-debated campaign promises.

A new Democratic-controlled House of Representatives was sworn in on Thursday; it passed a bill to reopen the government agencies without earmarking cash for the border wall. Donald Trump, however, had earlier vowed to veto any bill that would not include the funding he requested, and the Republicans continue to control the US Senate.

Someone in the Trump administration (perhaps POTUS himself) is apparently an avid Games of Thrones enthusiast: another GoT-style poster, saying "Sanctions Are Coming November 5", was seen lying on the table just in front of the president at a US cabinet meeting on Wednesday.

Asked about the "Sanctions are Coming" poster of Pres Trump on the conference table at the Cabinet meeting yesterday, Conway couldn't explain why it was on display. pic.twitter.com/uIGhh3r7mb

Donald Trump published the sanctions poster in early November, three days before the US was slated to hit Iran with new sanctions after pulling out of the Joint Comprehensive Plan of Action.

000000
Popular comments
This is one Wall that will very definitely not be made of ice. Solid metal more likely, immune to dragon breaths.
Kt
4 January 2019, 10:14 GMT
000000
Newsfeed
0
New firstOld first
loader
LIVE
Заголовок открываемого материала
Access to the chat has been blocked for violating the rules . You will be able to participate again through:∞. If you do not agree with the blocking, please use the feedback form
The discussion is closed. You can participate in the discussion within 24 hours after the publication of the article.
To participate in the discussion
log in or register
loader
Chats
Заголовок открываемого материала
Worldwide
InternationalEnglishEnglishMundoEspañolSpanish
Europe
DeutschlandDeutschGermanFranceFrançaisFrenchΕλλάδαΕλληνικάGreekItaliaItalianoItalianČeská republikaČeštinaCzechPolskaPolskiPolishСрбиjаСрпскиSerbianLatvijaLatviešuLatvianLietuvaLietuviųLithuanianMoldovaMoldoveneascăMoldavianБеларусьБеларускiBelarusian
Transcaucasia
ԱրմենիաՀայերենArmenianАҧсныАҧсышәалаAbkhazХуссар ИрыстонИронауОssetianსაქართველოქართულიGeorgianAzərbaycanАzərbaycancaAzerbaijani
Middle East
Sputnik عربيArabicArabicTürkiyeTürkçeTurkishSputnik ایرانPersianPersianSputnik افغانستانDariDari
Central Asia
ҚазақстанҚазақ тіліKazakhКыргызстанКыргызчаKyrgyzOʻzbekistonЎзбекчаUzbekТоҷикистонТоҷикӣTajik
East & Southeast Asia
Việt NamTiếng ViệtVietnamese日本日本語Japanese中国中文Chinese
South America
BrasilPortuguêsPortuguese
NewsfeedBreaking
11:08 GMTPentagon Chief Vows to Support Ukraine's Effort on Black Sea Region Security
11:05 GMTMuslim Parliamentarian in India Questions PM Modi's Silence on Killings in Jammu and Kashmir
10:54 GMTCalls for Probe Into Maxine Waters Over Report She Paid $80,000 in Campaign Cash to Her Daughter
10:54 GMTSergei Lavrov: NATO 'Buried' Idea of Consultations With Russia
10:41 GMTAfghan Resistance Calls for Probe Into Ex-US Envoy Khalilzad's Taliban Ties
10:28 GMTChina's PLA Ramps Up Scale, Military Drills Duration Near Arunachal Pradesh, Indian General Warns
10:16 GMTScientists Have Come Up With a Way to Improve Wear Resistance of Steel in Seawater
09:46 GMTJapan to Boost Defence Capabilities in Wake of North Korean Missile Launches, PM Kishida Says
09:32 GMTIndependence for Wales is ‘on the Table’ as New Commission Looks at the Future
09:23 GMTGlobal Times: US Should Stop Eyeing Too Much on China's Hypersonic Missiles and Broaden Its Horizons
09:16 GMT'Manchester United a Disconnected Team, Making Basic Errors': Gary Neville Rips Into Red Devils
09:07 GMTVideo of Erdogan, Surah From Quran Posted on Trump's Website After Hacking Attack
09:05 GMTTorch Handover for Beijing Winter Olympics Held in Greece
08:46 GMTCzech Police Probing Possible 'Crime Against Republic' Over President Zeman's Hospitalisation
08:35 GMTFake Edward Snowden Account Removed From Telegram After Whistleblower's Outburst
08:35 GMTKidnappers of 17 Missionaries in Haiti Demand $17 Million For Their Release, Reports Suggest
08:08 GMT'Under Cloak of Darkness': Biden Administration Reportedly Flying Migrant Children to Suburban NY
07:54 GMTShockwaves Felt in Israel After Powerful 6.4-Magnitude Quake Hits Greece
07:35 GMTPresident of European Commission: Brussels 'Will Not Allow' Poland to Put Bloc's Values 'at Risk'
07:16 GMTTen Years After Shalit Deal, Palestinian Prisoner Recalls His Release, Struggles, & Hopes