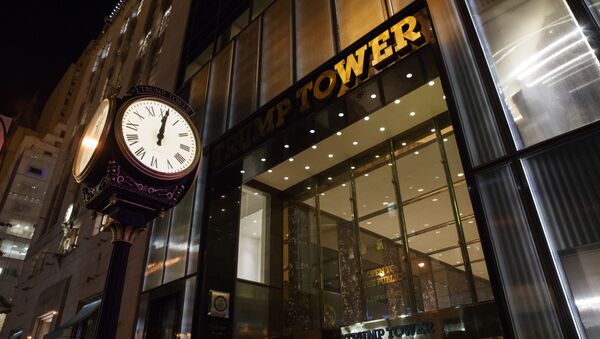 © AP Photo / Evan Vucci
Subscribe
Thousands of signers recently gave their names to a MoveOn petition calling for a stretch of New York City's Fifth Avenue to be renamed after former US President Barack Obama.

Trump Tower Moscow: A CIA-Backed Provocation Against Putin, Trump – Economist
The petition, which was started by Elizabeth Rowin, is specifically looking for "the stretch of Fifth Avenue between 56th and 57th Streets be renamed ‘President Barack H. Obama Avenue.'"

"The City of Los Angeles recently honored former President Barack Obama by renaming a stretch of the 134 Freeway near Downtown LA in his honor," the petition reads.

"We request the New York City Mayor and City Council do the same by renaming a block of Fifth Avenue after the former president who saved our nation from the Great Recession, achieved too many other accomplishments to list, and whose two terms in office were completely scandal free."

The request would have to be first approved by the New York City Council before Democratic Mayor Bill de Blasio could sign off on the name change.

Now, if such a measure is approved by city officials, the move would affect one high-profile skyscraper — the Trump Tower, which served as the headquarters for US President Donald Trump's 2016 campaign, and will do so once again for his 2020 re-election campaign, lies on the stretch of Fifth Avenue that the petition targets.

The council previously stirred up some controversy in December 2018 after unanimously voting in favor of renaming streets after New York native hip-hop group Wu-Tang Clan and famed rapper Biggie Smalls, whose birth name is Christopher Wallace.

Pending de Blasio's signature, the renaming efforts would bring Christopher Wallace Way and the Wu-Tang Clan District to the Big Apple's Brooklyn and Staten Island boroughs, respectively, according to NPR.

"Hip-hop deserves that respect," LeRoy McCarthy, who led the renaming effort, told NPR. "There's a certain sense of dismissal for hip-hop historically… they think it's not worthy of being recognized, of the recognition that you would give to classical music or jazz or rock and roll."

S/O to the @wutangclan members that I got to connect with tonight @realghostfacekillah @ugod_zilla @methodmanofficial (not pictured) plus #Power, and share the developments of the #Wutangclandistrict in #Statenisland street co-naming efforts. Now that #ChristopherWallaceWay is advancing, hopefully #Wutangclan will get a street named too, more to come from #heterodoxxinc. S/O to the good people of #Shaolin, @cmdebirose, and @jimmykimmellive #kimmelinbrooklyn. #HipHopDontStop

000000
Popular comments
Talk about ignorant sheeple. You want to honour the scumbag mass murderer who bailed out failed banks and threw homeowners to the wolves. You Amerikans are beyond stunned.
A-mind-not-wasted
5 January 2019, 00:17 GMT
000000
Thats easy a simple typo and its Obuma parade.