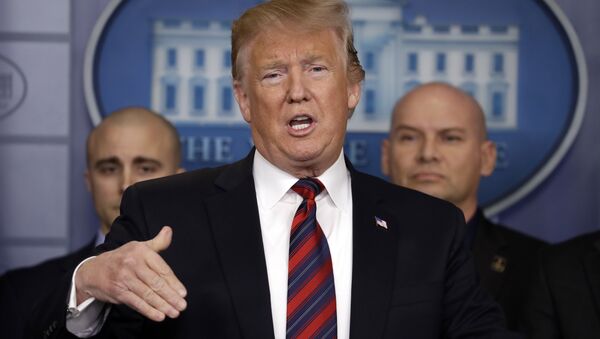 © AP Photo / Evan Vucci
Subscribe
US President Donald Trump appeared in his first White House press briefing of 2019 on Thursday to congratulate Nancy Pelosi (D-CA) on taking over the role of speaker of the US House of Representatives as a new US Congress came into session.

With Democrats now in control of the House of Representatives, the Trump White House is expected to encounter difficulty in enacting its agenda, but the president's briefing room statements, contrary to his usual online posture, were quite conciliatory. "I think it'll be a little bit different than a lot of people are thinking," Trump said of the way his administration and the new Congress will work together.

The rest of the short briefing was devoted to border control, with the president handing over the microphone to border patrol officials.

Brandon Judd, president of the National Border Patrol Council, used his time at the podium to defend Trump's vision of a southern border wall with Mexico, stressing that "we need those physical barriers."

​Trump remarked that "without a wall, you cannot have border security." He did not take any questions during his brief and one-of-a-kind appearance in the press briefing room, which is not a typical habit of sitting US presidents. Currently, the US is experiencing a partial government shutdown as a result of lawmakers not giving Trump his requested $5.6 billion for the creation of the southern wall. The shutdown has now gone on for 13 days.

Trump's appearance came hours after the swearing in of the 116th US Congress.